When Aminat Idrees headed for the 20th National Sports Festival in Benin City, Edo State she was an unknown quantity but her sterling performance in the taekwondo event with three medals despite being eight-month pregnancy has now attracted the attention of the sporting world, reports OLALEKAN OKUSAN. 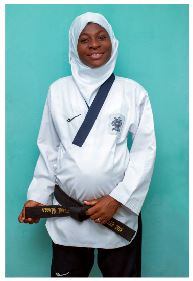 Aminat Idrees’ story is undoubtedly one of the highlights of the 20th National Sports Festival (NSF)  following her unique performance as an expectant mother in taekwondo’s  poomsae event  brought her to national and global limelight.

Now  Mrs. Matepo,  Aminat, has been a regular medallist at the NSF  since making her debut at the 2010 edition in Port Harcourt, Rivers State and has since won medals in subsequent editions.

Incidentally, taekwondo runs in her family and the 26-year-old graduate of the University of Lagos is as proud as a peacock about her rich heritage.

“I was born into a taekwondo family,” the usual taciturn  Aminat told The Nation in an exclusive conversation. “My father was a taekwondo coach and all my siblings are also taekwondo practitioners. “Being a family sport, I grew up knowing about taekwondo and I fell in love with it. It is not compulsory that we had to practice taekwondo but I embraced it for self-defense.

“ As a female practicing taekwondo, you have this confidence that you are physically fit and strong.  Above all it allows me to use my hijab. Those are the reasons I decided to stay active in the sport,” she said.

“I started taekwondo when I was very young. I can’t recall the precise age I started.  I am 26 and I have been doing it for over 18 years now at least.

“Taekwondo as a branch of martial arts generally promotes or teaches humility and confidence. It exposes one to opportunities to compete at national and international levels which I found attractive. A personal benefit as a lady is that you can be sure that you can defend yourself averagely against any form of harassment,” she added. 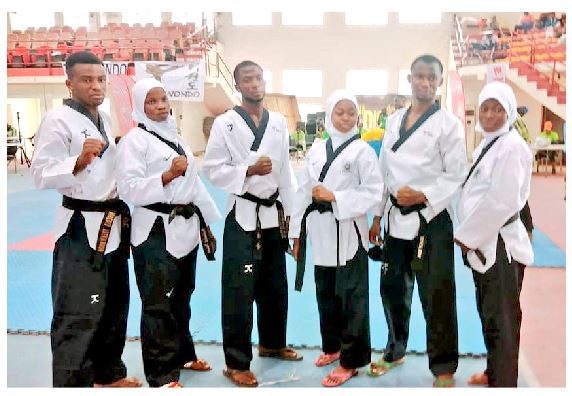 With several postponements of the championship due to COVID-19, Idrees waited endlessly to participate in Edo 2020. During the wait, she  decided to settle down in marriage last year even as she kept her determination to compete in the sports festival whenever it would eventually hold.

“I have been practicing for the National Sports Festival before I got married because it was supposed to have been held last year,” she offered. “So even after I got married and got pregnant, I continued to train for the sports festival. I believed it was something I could do.

At Edo 2020, Idrees clinched gold in the mixed poomsae, silver in the team poomsae, and bronze in the individual poomsae. According to Idrees, making the podium was her goal right from the start.

She said:  “When I was competing in Benin, making it to the podium was on my mind. The tension was really high but I was determined to perform well despite my condition of being eight months pregnant. I had actually envisaged I was going to win because I believe in God and myself. I know I can do this and thank God it became a reality.”

Idrees also attributed her courage and tenacity to the support she got from her husband who she described as her number one fan.

Her words: “My husband has been my number one fan as he is 100 percent supportive and there is no negativity from him. He believes it is something I can do and there has never been any pressure to quit from him.

Idrees said she had embraced Poomsae, which is defined as a fight against an imaginary opponent, prior to the festival. “I have actually been a Kyorugi and Poomsae athlete. I practice both but Poomsae gives more advantage to a lady especially when you understand what it is about as you don’t have to fight all the time. Poomsae had more advantage as you can do it for a longer period of time when you can’t fight anymore. Since I got married I started to focus more on Poomsae instead of Kyorugi which is the fighting aspect of taekwondo,” she said. 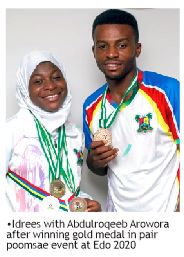 For those faulting her for competing despite her condition, Idrees said: “The criticism is coming probably from people who have not taken time to watch videos or read up articles about me.

“Basically, it is because they don’t understand what taekwondo is all about. A lot of people see it as combat or fight but there is more to it.

“I will say people have the right to their opinions but instead it is best they ask questions or make research to be sure about what they are saying. I will say it again,” she explained.

“I did not participate in the combat event at the National Sports Festival. I participated in Poomsae, which is a demonstrative aspect of taekwondo.”

Prior to her feat in Edo, Idrees won silver at her debut in the 2010 edition of the National Sports Festival in Port Harcourt. She also claimed gold in the 2012 edition held in Lagos.