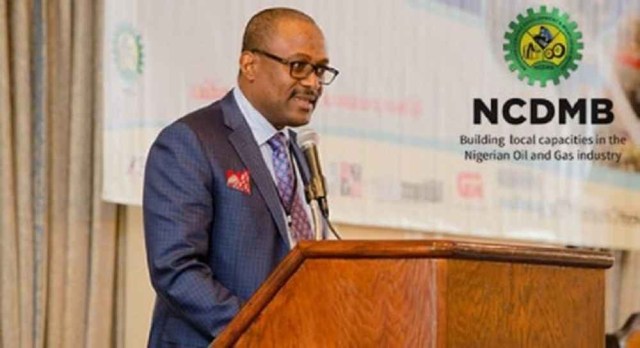 The current percentage of the fund is and it is proposed to be increased to two per cent.

NCDMB made this in a statement by its management in Abuja on Monday.

It said that the increase was proposed in the amendment of the Nigerian Oil and Gas Industry Content Development (NOGICD) Act.

It named the other organisations and stakeholders to include the Nigeria Liquefied Natural Gas (NLNG), the Petroleum Technology Association of Nigeria (PETAN), Petroleum Contractors Trade Section (PCTS) and Oil Producers Trade Sectio (OPTS).

The NCDF according to the NCDMB, is deducted from the value of oil and gas contracts awarded in the oil and gas industry.

The board said that the representatives of the leading oil industry organisations advised against the proposed increment, stressing that an amendment of the NOGICD Act should promote and protect local businesses.

“It should also encourage entry of foreign capital and technology into the country to further grow the sector.

The statement quoted the Executive Secretary of the NCDMB, Mr Simbi Wabote as saying that the one per cent NCDF deduction should be maintained given the pressure that the global oil and gas companies were facing with cost escalations and price reductions in the industry.

According to him, with prudent management of the NCDF and the full cooperation of the operating companies, local content will continue to operate efficiently and grow.

On the new provision to earmark 0.5 per cent of gross revenue of oil and gas companies for research and development, he said the board welcomed it on the condition that the money would be for the operator’s own utilisation.

“The board also supports the proposal by the amendment to add Naira to the benchmark currency for local contracts.

“This means a paradigm shift from the dollar-denominated provision to a bi-currency model,” Wabote said

On the requirement for Companies Seeking Expatriate Quota (EQ) to Provide Additional Information, Wabote said the board supports the review because it increased the information to be provided by companies seeking expatriate quota approval.

He said this would further prevent abuse of the process and round-tripping of expatriates across sectors of the economy.

“We have a very good interface with the Ministry of Interior; the proposed amendment will further enhance data exchange and inter-agency collaboration,” Wabote said.

On the proposal to impose administrative sanctions on defaulters of the Act, the Executive Secretary said: “The board welcomes the change for its positive impact.’’

Also, in the statement, PETAN Chairman, Mr Nicolas Odinuwe said that it would be a grave mistake to repeal the NOGICD Act, which had been acclaimed by several stakeholders to be very successful.

He said that the best strategy would be to fine-tune a few areas to make it more effective.

Half of working adults fear for their jobs