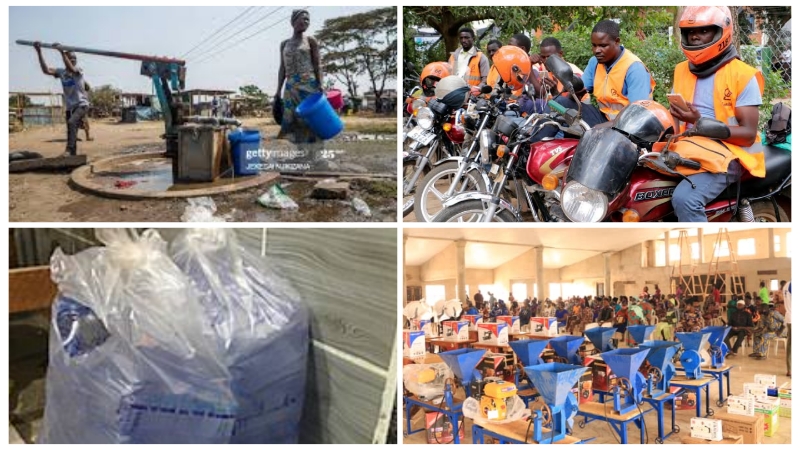 Nigerians show resiliency in everything even in poverty, hunger, idleness, gullibility and abject ignorance. In this country where hardwork and honesty are not rewarded, they also forgive the dead even if he or she lived a notorious life full of crude exploitation of the vulnerables but was nice and kind to them. We have lost our value system. We give attention and place premium value on worthless things. Politicians feed heavily on the loss of value system to continue exploiting and insulting the sensibilities of the common people.

Leadership is raw, rare, inbuilt and dynamic. Leaders do not only lament but they provide workable solutions and try every possible best to relieve the burden of their people. Leaders do not only lead the people but they take them to where they ought to be. It is quite unfortunate that despite the public outcry and declaration of war against poverty worsened by COVID-19 pandemic, we still have politicians who use public funds to invest in things that have no direct impact or influence in the lives of the people. Some small scale businesses have folded up and many have lost the capacity to make profits, leading to the gradual elimination of the middle class which is a strain on the economy yet we have shown less compassion to the survival of the lower class.

Recently, a member of Osun State House of Assembly launched an empowerment programme to relieve the burden of his people. He distributed sewing machines, hair dryers, aluminium cutting machines, farm equipments and also assisted traders with funds. Days after the event, another member of same assembly invited the speaker of the House, State governor, royal fathers, party leaders and many others to the commissioning of two boreholes; each per town. I know a philanthropist who constructed three boreholes and repaired five without fun fair and noise. It is all about value system and worth. I really feel for the people and commiserate with them over the new low and the jester they are nuturing.

This is 21st century, every society deserves leaders either young or old that can lead them into the future. This is why I have always canvassed for people of conscience who have succeeded in their chosen careers or private life to be in public offices. A careful look at our political sector, we have many opportunists who have no clear professsion before they ventured into politics. They live in deceit, romance falsehood and bed hypocrisy. When an opportunist who has no clear understanding of himself or herself nor the society but solely driven by quest for power with influence that comes with it is in charge of any society, both the people and the jester would either remain stagnant or move backward in progess. This is evident in constituencies, local governments, states and nations where jesters lead.

Some months ago, a federal lawmaker embarked on massive empowerment and strengthened the young population by assisting small scale businesses with funds and distribution of buses and empowerment tools. This federal lawmaker belongs to the same assembly where others narrates the tales of paucity of funds and only distribute cars as gifts to the elites and motorcycles to the common people. Poverty makes gullibility worse and these two are strong weapons the politicians use.

Have you come across a photo of a House of Representatives member in Gombe state alongside 75 constituents he sponsored to the police academy who have not become graduates and officers of the law? When I saw the photo, I quickly had a flashback to the inglorious Dubai trip where a federal lawmaker sent 80 able bodies to Dubai for a doable course in Obafemi Awolowo University as political compensation. Now they have returned to the colony of unemployed ones after spending some weeks in Dubai with taxpayers fund. How do these people intend to impact the federal constituency with what they learnt in Dubai? I feel sorry for the South. We are more of shows than genuine efforts.

I visited one of my brothers who happens to be a financial expert in his office. I have not taken my seat when he started lamenting the expansion of colony of unemployed ones and its adverse effect on the economy and security of our dear nation. His primary focus was empowerment as a credible alternative and this propelled us to look into the different ways politicians use to empower their people. We concluded that a lot of politicians are bereft of ideas, completely lacking ideas that can change and develop the society. The little who invest in time, people and resources are not appreciated.

In all, these lazy public officials were elected into power by the people in which majority collected stipends to vote them in. So we are in the moment of reaping what we sow, he concluded.

Use the comment section to tell me what you are reaping.

Thank you. Let us meet in the next edition of TIME BOMB.

The post Electorates, dividends and the consequences of choice appeared first on GCFRNG.

You are the wrong choice Ondo people made – Ajayi replies Akeredolu