It might sound strange, but 2020 just keeps getting better and better for Napoli from a footballing point of view. The Partenopei were a complete mess back in December when the infamous row between the players and the club resulted in Carlo Ancelotti’s sacking. However, Gennaro Gattuso has been doing wonders ever since, winning the Coppa Italia and building a solid foundation for next season.

Putting the results aside, Napoli have done extremely well in the January transfer window, bringing in Diego Demme, Stanislav Lobotka and Matteo Politano, while also securing the services of Amir Rrahmani from Verona and SPAL’s top goal scorer Andrea Petagna for next term.

While Aurelio De Laurentiis has done well to add quality and depth to the squad, it’s hard to say that any of those signings bring the excitement that the Napoletani are used to seeing. That’s where Victor Osimhen comes in.

The 21-year-old striker is set to become Napoli’s most expensive signing ever, as the Partenopei are set to pay a stunning €50m plus Orestis Karnezis and bonuses to Lille OSC for the Nigerian talent.

The reports of €81m seem far-fetched and probably included the wages for his entire contract. It’s still a lot more than the Partenopei paid for their current most expensive acquisition Hirving Lozano, who arrived for €42m from PSV Eindhoven last summer.

It’s obvious that even for €50m the expectations towards Osimhen will go way beyond the pure excitement that such a signing brings, but what exactly can he bring to Napoli?

The Nigerian’s numbers clearly can’t justify his gigantic rumoured €81m transfer fee, as Osimhen scored 18 goals and four assists in all competitions for Lille, before Ligue 1 was cancelled due to the COVID situation. However, his age and playing style are what make him perfect for Napoli, as the 185cm tall striker possess impressive speed and physique, while his off the ball movement is simply remarkable.

Osimhen is a player who likes to run in the channels and behind the back of opposition defences, which makes him a good for Napoli’s playing style. His acceleration and ability to run with the ball also mean he would be perfect for Gattuso’s counter-attacking approach in certain games. 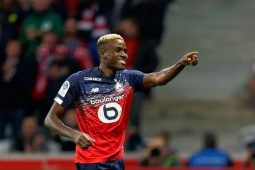 While neither Arkadiusz Milik nor Dries Mertens combine those qualities, Osimhen’s biggest advantage over them is the intensity of his pressing gamе. The Nigerian averages 1.3 recoveries in the final third, which is significantly higher than Milik’s 0.9, while his speed and agility are far superior to those of Mertens, who at 33, often loses some of his intensity in the latter stages of games.

Osimhen’s presence in Napoli’s attack would allow the Partenopei to recover possession much easier and in more advanced areas of the pitch, while his speed and positioning in the penalty area will make the transition from defence to attack much smoother. This is further highlighted by Osimhen’s 78.9% progressive passes success rate, which is equal to Mertens, but significantly higher than Milik’s 64%.

In terms of shooting, Osimhen is also far more composed than his age might suggest, as 44% of his shots hit the target, which is much better than Mertens’ 35%. Milik’s stats look similar in that regard, but considering that the Pole seems eager to leave, it would certainly help if Napoli have a player of similar height and shooting accuracy.

The Nigerian’s technical ability is not to be underestimated as well, as although he is right-footed, he is also very capable with his left, scoring seven goals with his supposed weaker foot.

Of course, pointing out only the strong aspects of Osimhen’s game would be wrong, so just like Martin Schmidt who used to coach him at Wolfsburg admitted recently, the youngster still has a long way to go tactically. However, he already has remarkable speed and athleticism, so he already is a very strong player.

Mentality wise, just like every young player, the 21-year-old needs to improve his concentration, but he plays with such fire and passion that could potentially make him instrumental for Gattuso’s vision of the team.

Despite all this, the fact remains that Osimhen’s transfer is a huge gamble for Napoli. Becoming Napoli’s most expensive signing ever and one of the most expensive African players of all time surely comes with a burden, so the big risk here is to avoid the exaggerated transfer fee putting in unrealistic expectations towards the player.

It is no coincidence that the likes of Manchester United, Liverpool and Chelsea have shown interest in the Nigerian, so there is little doubt that Osimhen can light up Naples. He just needs to be given the chance.

Transfer: What Victor Osimhen said after joining Napoli from Lille