With the Bundesliga is over, Lazio’s Ciro Immobile has the opportunity to become outright leader and winner of the 2019/2020 European Golden Shoe if he can add to his goal haul against Napoli at Stadio San Paolo

The European Golden Shoe award is given to the player who has scored the most goals for their club in the season, subject to the standard of competition in which the player is competing.

The five elite leagues – Premier League, La Liga, Bundesliga, Serie A and Ligue 1 – all carry a weighting of 2, meaning that a player will be awarded two points for every goal they score in these competitions.

Going into today’s encounter, Ciro Immobile has now scored 35 league goals which puts him  one goal ahead of  Robert Lewandowski of Bayern Munich. Cristiano Ronaldo is in third with 31 goals, while he and Immobile both have the opportunity to score as the  Serie A winds down today. 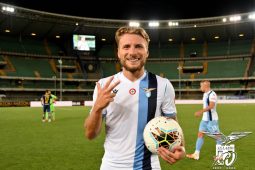 Even if the competition weighting were taken off, Immobile and Lewandowski’s goal-scoring exploits for their respective sides would still see them top the list.

The Premier League is the best represented league on the list, with five players featured. They are Jamie Vardy, Pierre-Emerick Aubameyang, Mohamed Salah, Danny Ings, and Raheem Sterling.

Serie A has four representatives; as well as Immobile and Ronaldo we have Romelu Lukaku of Inter, and Francesco Caputo of Sassuolo.

With La Liga suffering from a perceived drop in quality over the past 12 months, this is reflected in Lionel Messi and Karim Benzema being the only entrants in the list.

Out with the top five leagues and being penalised by the competition weighting are Shon Weissman of Wolfsburg, Patson Daka of RB Salzburg, Jean-Pierre Nsame of Young Boys, Christian Gytkjaer of Lech Poznan, and Alexander Sorloth of Trabzonspor.

Just like the Ballon d’Or, the European Golden Shoe has historically been dominated by Ronaldo and Messi. Indeed since 2007 only Diego Forlan in 2008/09 and Luis Suarez in 2015/16 have broken the duopoly. Messi is the only player to break 100 points in the modern ratings system, with his 50 goals in 2011/12 pushing him past the milestone. Messi has six Golden Shoe awards to Ronaldo’s four.