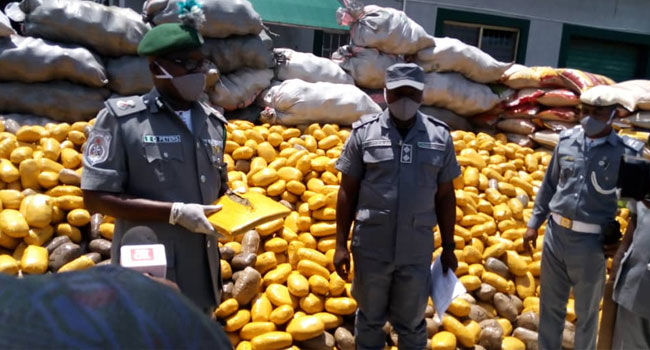 The Nigeria Customs Service (NCS) says it has made a massive seizure of drugs suspected to be Cannabis Sativa worth over N1 billion.

According to the service, this largest single seizure of hard drugs ever recorded by its officials on the high sea.

The Comptroller of Customs Western Marine Command in Lagos, Olugboyega Peters, disclosed on Thursday that the success was recorded by operatives of the command based on intelligence.

He explained that the operatives conducted round the clock surveillance for a period of three days in a maiden seagoing patrol of Lagos waters.

Peters added that suspected smugglers dived into the water upon sighting the customs operatives from afar around the Ishashi area of the state.

He noted that the drugs were suspected to be coming in from Ghana and had crossed many borders by water before the seizure in Lagos.

The comptroller stressed that since there were no suspects accompanying the seized goods, they would be liable to destruction in collaboration with relevant government agencies and other security services.

Customs seize items worth over N200m in Katsina

Customs seize N1.1billion worth of goods amid COVID-19 lockdown