The Democratic governor of Wisconsin, Tony Evers, on Monday issued an executive order to delay the state’s presidential primary for two months because of the coronavirus pandemic, but the order was quickly blocked by the state supreme court, leaving Tuesday’s vote up in the air just hours before polls were scheduled to open.

The court ruled 4-2 on Monday that Evers lacked the authority to move the election on his own.

Evers had previously opposed moving Tuesday’s election. But on Monday he attempted to delay it until June 9 amid criticism about how in-person voting can proceed safely at a time when public health officials are discouraging groups of people from gathering to avoid spreading of the virus. Some poll sites have already closed because nervous volunteers are unwilling to staff them.

Evers had been unable to strike a deal with Republicans to reschedule the election. His order comes after the GOP-controlled legislature refused his request to cancel in-person voting on Tuesday. GOP legislators called his attempt to delay the election a case of “unconstitutional overreach”.

The Wisconsin election is being viewed as a national test case in a broader fight about voter access in the age of coronavirus, with major implications for the presidential primary contests ahead – and, possibly, the November general election.

Evers’ order was blocked late Monday by the Wisconsin Supreme Court, which is controlled 5-2 by conservative justices. One of them is on the ballot Tuesday and recused himself from this and other election-related legal fights, narrowing the conservative majority to 4-2. 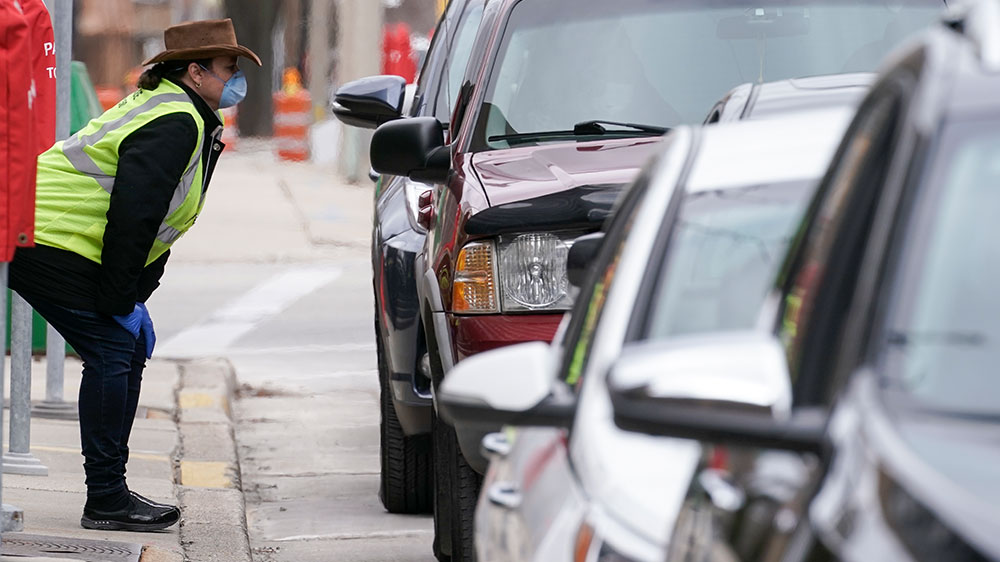 The Evers order came as a separate legal fight was pending before the US Supreme Court.

While several states had scheduled primaries in recent weeks, Wisconsin had been alone in moving ahead with in-person voting in the midst of the pandemic. Evers’ earlier insistence on moving ahead was even more extraordinary given that he had issued a stay-at-home order and closed all nonessential businesses. Dozens of polling places have been closed.

“Your choice is to go and vote in person and take a chance on contracting COVID-19 or stay home,” Democratic state Senator Jon Erpenbach said. “What do you think people are going to do?”

Evers and Republicans initially agreed that it was imperative for the election to proceed because thousands of local offices are on the ballot Tuesday for terms that begin in two weeks. There is also a state Supreme Court election putting the conservative incumbent against a liberal challenger.

The election “must happen” because of the terms that are ending, said Republican state Representative Ron Tusler, who tweeted over the weekend that elections continued during both the War of 1812 and the 1918 flu pandemic.

The state and national Democratic parties, along with a host of other liberal and voter advocacy groups, filed federal lawsuits seeking a delay in the election and other changes. A federal court judge just last week handed Democrats a partial win, allowing for absentee ballots to be counted through April 13, delaying the reporting of election results until then. But the judge, and later a federal appeals court, declined to postpone the election.

Republicans have appealed to the US Supreme Court, asking that it not allow absentee ballots to be counted beyond Tuesday. They argue that partial results could be leaked. The court was considering whether to take action.

Thousands of poll workers had said they would not work on Tuesday, leading Milwaukee to reduce its planned number of polling sites from 180 to just five. The National Guard was distributing supplies, including hand sanitiser, to polling sites across the state. In Madison, city workers were erecting plexiglass barriers to protect poll workers, and voters were encouraged to bring their own pens to mark the ballots.

George Dunst, 76, of Madison, is the former lawyer for the state elections commission who has volunteered at his local polling site for nearly every election since he retired. But he’s not going on Tuesday amid fears of contracting COVID-19.

“No matter what safety precautions you take, there’s going to be exposure,” he said. “Who knows who comes into the polling place?”