Ramallah, occupied West Bank – Up until he tested positive for COVID-19, Ibrahim al-Arja, was ridiculing the novel coronavirus. The 25-year-old manages his family-owned Angel hotel in Bethlehem, where the first cases of coronavirus were confirmed in Palestine.

“The last one to survive 2020 needs to turn the water heater off,” is one of many jokes making the rounds on social media platforms. Although it’s not directly linked to the pandemic, al-Arja said it was his favourite.

Punchlines pertain to a wide range of coronavirus topics, including isolation, sanitation, gender roles and distance learning, as well as projections of the outbreak and the new realities created in attempts to curb the virus.

In theory, humour is a coping mechanism – an escape or a salve in dire times. But jokes related to coronavirus do not entertain anthropologist and folklorist Sharif Kanaana, who taught at Birzeit University in the occupied West Bank and has dedicated 15 years of his career to collecting and archiving Palestinian jokes.

“I’m 85. No doubt the situation scares me. We have to be more serious and cautious about it,” Kanaana told Al Jazeera.

There’s nothing to do against an enemy that the world can’t see and that it can only know a little about, Kanaana explained. 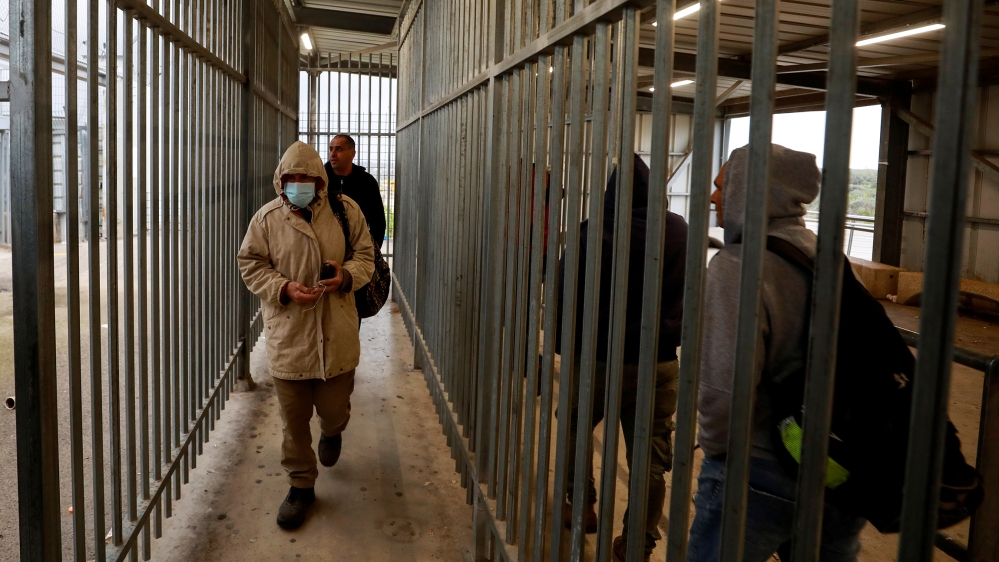 “People joke about it, because they are afraid and are pretending not to care,” he said.

Until a vaccine or a standard medical treatment is found, policymakers can only try to flatten the curve.

In room number 1309 of the Angel hotel, where al-Arja spent two weeks under quarantine, he tallied up the costs of coronavirus to his business. The immediate losses, he said, surpass $30,000 – and that is no laughing matter.

“While it seems [that] we are already in the single-digit negative growth area … if the most severe emergency measures are required in the coming weeks, the economy could shrink considerably more,” Raja Khalidi, director of the Palestine Economic Policy Research Institute, told Al Jazeera.

The Palestinian Authority (PA) has projected that its budget deficit could increase from $0.8bn to between $1.8bn and $2.4bn as a result of losses in government revenues, depending on the severity of the outbreak.

Nonetheless, in the trade-off between economic losses and the cost a larger outbreak would pose to public health, the PA made a swift decision early on.

The first seven cases in the occupied West Bank, believed to have been contracted from a tourist group visiting from Greece, were reported in Bethlehem on March 5. PA President Mahmoud Abbas declared a state of emergency late that day, and Bethlehem was under quarantine the next morning.

The Palestinian health sector is already stretched to the limit. In February, before the first cases were reported, doctors across the West Bank went on a two-week partial strike over an acute shortage of staff, equipment and beds.

There are 210 intensive care units in all Palestinian hospitals, half of them already occupied, Mai Keileh, the Palestinian health minister, told Al Jazeera. In case of a larger outbreak, at least 800 would be needed.

Nearly a month after the first cases were reported in Palestine, less than 13,000 tests have been carried out as of Monday – a fraction of the number conducted in Israel, which, according to an Israeli health ministry spokesman, carries out an average of 10,000 tests a day. 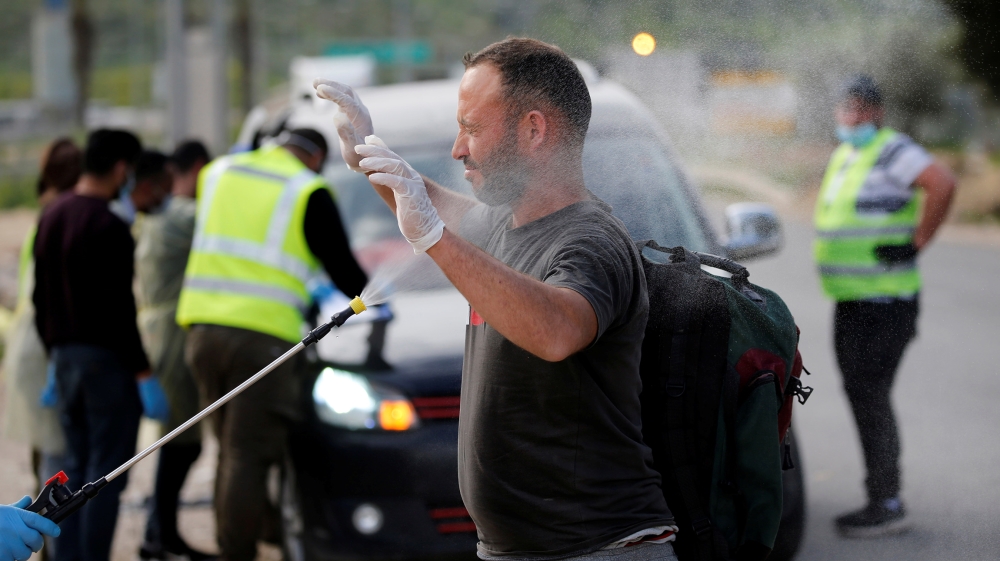 A Palestinian worker is sprayed with disinfectants as a precaution against the spread of the coronavirus disease, upon his return from Israel [Mussa Qawasma/Reuters]

As of Sunday, the PA had recorded 252 cases of coronavirus and one death.

For weeks, Palestinian officials have issued warnings that workers travelling back and forth between Israel, its settlements and their homes could fuel a larger outbreak.

Around 190,000 Palestinians work in Israel and in settlements built illegally in the occupied West Bank, including around 60,000 who work in Israel without documentation.

To prevent the virus from spreading at checkpoints, Israeli officials agreed with their Palestinian counterparts to allow Palestinian workers to stay at their workplaces, if their employers provide appropriate housing and proper sanitary conditions approved by the Israeli police.

A couple of days into the agreement, Israeli employers began to drop off workers who exhibited coronavirus-like symptoms at checkpoints between Israel and the West Bank. The Palestinian government urged all workers to return.

“Workers’ continued movement, with Israeli facilitation … is a blow to our early efforts to stop the spread of this pandemic,” said PA Prime Minister Mohammad Shtayyeh. 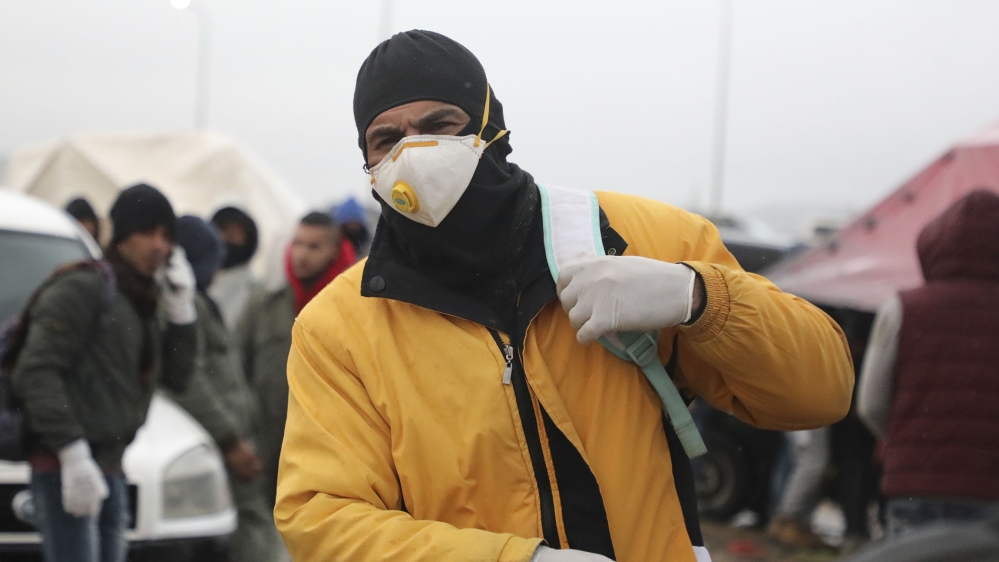 Palestinian labourers enter Israel to work, passing through a checkpoint between the West Bank city of Hebron and Beersheba in Israel [Hazem Bader/AFP]

“Israel’s decision to allow the entry of workers is an attempt to protect the Israeli economy at the expense of the lives of our workers. Israel’s economy is not as precious as the lives of our children,” he said.

Samir Rawajbeh is one of thousands who heeded the government call and left work in Israel. The 30-year-old father of three from Silwad – northeast of Ramallah – told Al Jazeera that he asked his wife to go to her parents’ house so he could self-quarantine for 14 days. He said he feared for his life, but more so for his family’s.

“This virus is not a joke. The number of cases was increasing in Israel, and I didn’t want to get in contact with any infected person,” he said.

With less than $500 left in his pocket, he said it wasn’t an easy decision to make. “I hope this nightmare is over before the cash is,” Rawajbeh said.

Others decided to take the risk. Jihad Hussein from Azzun, east of Qalqilya, is among an estimated 45,000 Palestinian workers who are still inside Israel. The 31-year-old left his wife and two children behind two weeks ago.

“If I didn’t have financial commitments, I wouldn’t be here,” he said. Upon return, Hussein said he is planning to get tested and go into quarantine, although he does not plan to return soon.

Palestinians who work in Israel and the settlements are estimated to pump $2.5bn into the Palestinian economy a year.

“The lost income of those newly-unemployed former workers in Israel will bear heavily on the overall private consumer demand and expenditure in the coming months, alongside other domestic economic impacts,” Khalidi said.

Israel’s decades-long occupation of the West Bank has left Palestinians here with no control over their borders and resources and has also handicapped Palestinian leaders in the fight to contain the virus. The Palestinian government has been in a fiscal crisis for over two years. It forecasts that its revenues will drop by 40 percent over the next three months if the outbreak remains at a similar level.

Whether the Palestinian recession will be V-shaped, with a quick rebound, or U-shaped, with a long period of stagnation, is contingent upon the PA’s ability to delay the spread of the virus, while keeping whatever businesses that can be left open in operation and providing economic relief to the unemployed.

It is not possible to tell how many people will get infected over time, when hundreds, if not thousands, keep crossing from and into Israel and its settlements.

“The peak of the curve of the epidemic in Palestine is not clear yet, because our workers inside Israel didn’t [all] return … yet,” Keileh, the health minister, told Al Jazeera.

Only after Israel shuts down for the Jewish holiday of Passover on April 8, when thousands of workers are expected to return to their homes in the West Bank, will it be possible to forecast the shape of the curve, Keileh added.

Ali Jarbawi, a political science professor at Birzeit University, said that the lockdown imposed by the PA was “necessary, but not enough”.

“As long as there are cases in Israel and workers crossing back and forth, it won’t be over,” he said. “It’ll start to end here after it ends in Israel.”