San Salvador, El Salvador – Legislators in El Salvador approved a controversial “reconciliation law” late on Wednesday, reigniting the debate about transitional justice after a 12-year war that ended in 1992.

The law is meant to establish how the country will handle justice and reparations for crimes against humanity during that period. But human rights groups and victims of the war – a conflict between left-wing rebels and the United States-funded Salvadoran military that left more than 75,000 people dead – accuse legislators of approving what they see as a new amnesty law.

“When the time came, the assembly did not take into consideration what we said [as victims],” said Dorila Marquez, a 63-year-old whose family was killed in the 1981 El Mozote massacre, the worst of the civil war. “We didn’t want a law of impunity, a new amnesty law in disguise. The truth is that’s what they’ve done.”

A UN truth commission found that more than 80 percent of human rights abuses were carried out by the Salvadoran government. Victims like Marquez had no path to justice for years because an amnesty law was signed shortly after the 1992 peace accords. In 2016, the country’s Supreme Court ruled the amnesty law unconstitutional. As part of the ruling, the court ordered the creation of an ad hoc commission to study the ruling and create a law to carry it out.

After a years-long process and a tense relationship with victims’ groups, the Legislative Assembly put the proposal to vote on Wednesday night. The law seeks to create a path for justice, reparations and preservation of historical memory in El Salvador. To do so, it proposes opening a National Council for Reparations, creating a national registry of victims and integrating the history of the civil war into public school curriculums, among other reforms.

Legislative Assembly President Mario Ponce told reporters Wednesday that the law complies with the terms laid out by the constitutional court in the 2016 ruling in respect to transitional justice. He said it will be up to the Supreme Court to decide if this is not true.

Human rights groups point to a few key elements of the law as re-establishing amnesty and violating international norms for human rights trials for crimes against humanity. 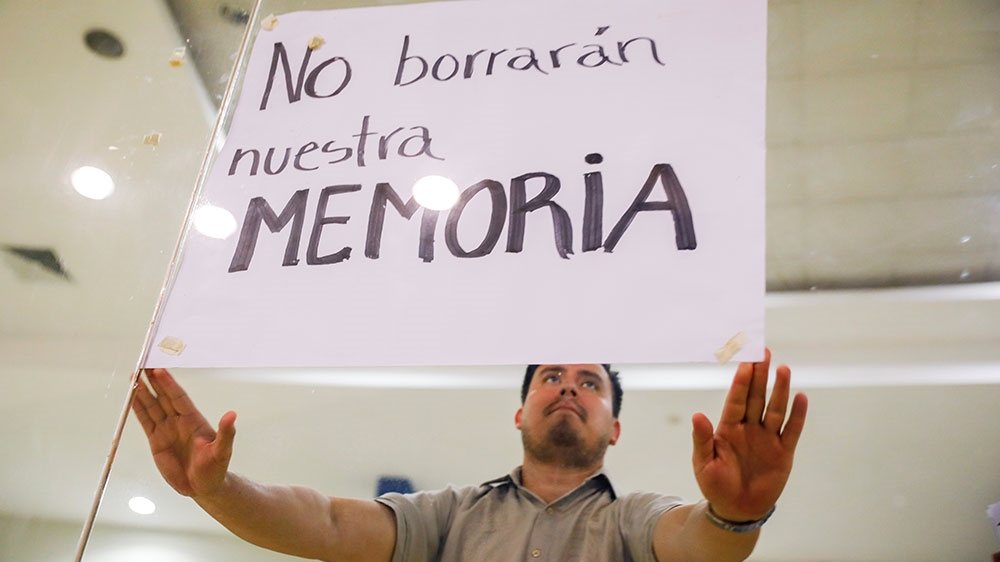 A human rights activist protests during a congress session over the law. The poster reads: ‘They won’t erase our memory’ [Jose Cabezas/Reuters]

The law allows the commutation of a sentence because of age or health concerns, regardless of a perpetrator’s cooperation. It only gives investigators a year to develop a case, which rights groups say is not enough time given the seriousness of the crimes and the decades that have passed. The limitations make it more difficult to make a strong case, said Claudia Paz y Paz, director of Costa Rica-based human rights organisation Centre for Justice and International Law (CEJIL) for Central America and Mexico. Additionally, the law establishes a 10-year period in which charges must be brought against a perpetrator, which goes against the UN’s recommendation that says crimes against humanity should never have a statute of limitations.

“We reject this law because it clearly violates the access to justice for the victims,” said Irene Gomez, a lawyer who represents victims of the civil war through San Salvador-based human rights organisation Cristosal. Paz y Paz called it a “mocking of victims” whose “expectations of justice have been let down once again.”

‘On the side of assassins’

Jose Amparo Martinez, whose family was killed in the El Mozote massacre, was disappointed by the news. “They didn’t just kill our families, they also ruined everything that we had and burned our houses,” Martínez said. “I’m not in favour that they just say sorry and are free.”

He supported some leniency for perpetrators based on their age and health, but not so much that they would not be held responsible.

Marquez agreed. “It should be a just sentence,” she said.

“They tricked us,” Marquez said. “The lawmakers said they were with us as victims, but they lied. They are on the side of the assassins.”

President Nayib Bukele, who recently sparred with legislators in a constitutional crisis, tweeted on Wednesday that he would veto the law because it does not contain the fundamental elements for truth, justice and reparations.

Victims and human rights groups are calling on the president to follow through on his promise. “Things shouldn’t remain as they are: in impunity,” said Marquez.