Libya’s warring sides have resumed UN-brokered talks in Geneva aimed at establishing a lasting ceasefire, even as eastern-based forces stepped up their assault on the capital, Tripoli, hitting its port.

The targeting of the strategic facility on Tuesday appeared to be the first such attack since the forces of renegade military commander Khalifa Haftar launched an offensive in April last year to seize the city.

Footage shared online show thick black smoke rising from the dock areas of Tripoli, which is controlled by the internationally recognised Government of National Accord (GNA).

Ghassan Salame, head of the UN Libya mission, called the port attack a “big breach” of the fragile – and repeatedly violated – ceasefire that was brokered by Russia and Turkey on January 12 as part of efforts to de-escalate the battle for the capital.

Reporting from Tripoli, Al Jazeera’s Mahmoud Abdelwahed said the situation was “very tense” around the port following the attack.

“Employees at the port said they have been trying to move the tankers in the port loaded with gas and fuel to prevent an environmental disaster from happening due to the multiple attacks from Haftar’s forces,” Abdelwahed said.

Oil-rich Libya has been splintered between competing factions and militias since former leader Muammar Gaddafi was overthrown and killed during a NATO-supported uprising in 2011. It is currently split between two rival administrations – the Tripoli-based GNA and another allied with Haftar in the eastern city of Tobruk that controls key oil fields and export terminals – and is each backed by an array of foreign countries. 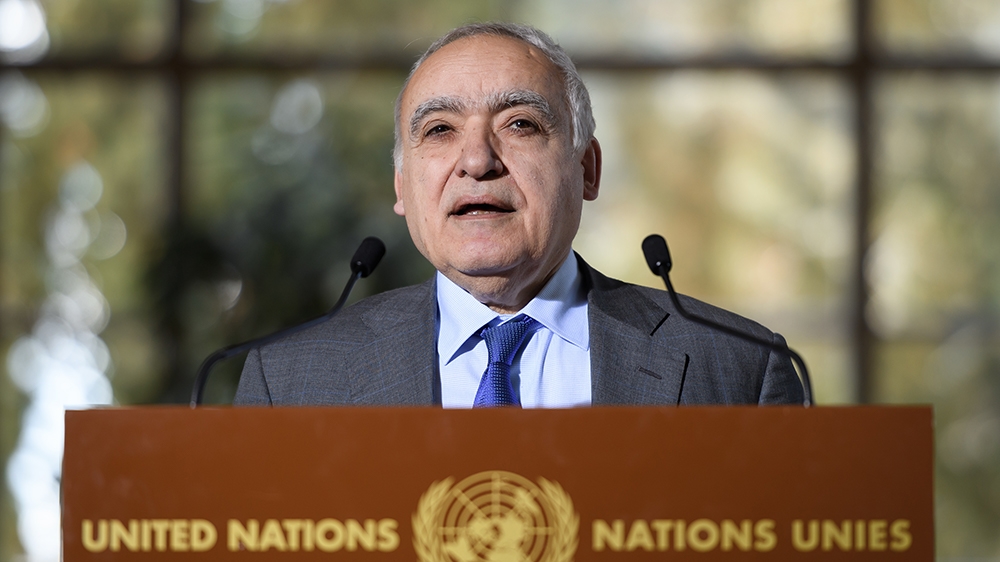 Meanwhile in Geneva, five military representatives from the GNA and another five from Haftar’s self-styled Libyan National Army (LNA) held indirect talks, more than a week after they ended their first round of negotiations without striking a deal that would help end the fighting in Tripoli.

“We hope to be able in this second round to come to some kind of consensus about what a lasting ceasefire could look like in Libya,” Salame told reporters.

He said he was meeting with the two sides separately but did not rule out possible joint talks at a later date.

The UN envoy added the talks would focus on stopping “the frequent violations of the truce”, as well as helping civilians displaced by the fighting return to the capital and its surrounding area.

In the previous round of talks, the UN mission said there was “broad consensus” between the two sides on “the urgency for Libyans to safeguard the sovereignty and territorial integrity” of the country, and to “stop the flow of non-Libyan fighters and send them out of the country”.

Salame said on Tuesday said agreeing a ceasefire was “not a precondition” for talks planned to start in Geneva on February 26 on finding a political solution to the long-running conflict.

Al Jazeera’s James Bays, reporting from Geneva, said the UN envoy is trying to keep the diplomatic momentum, despite the continued flow of arms to the warring sides and the absence of a durable ceasefire.

“On the 26th, the ambitious plan is to get representatives of all the factions in Libya here to the UN’s European headquarters for talks. They are going to keep trying here despite all the difficulties on the ground,” Bays said.

The talks in Geneva came a day after European Union foreign ministers agreed to a naval mission that will be authorised to intervene to stop weapons shipments into Libya.

Jason Pack founder of Libya A.nalysis LLC, a political affairs think tank told Al Jazeera that the ceasefire talks have so far aimed to establish “diplomatic momentum” rather than stop fighting on the ground.

“You could say that [the ceasefire talks] are too early because until there’s a blanket arms embargo that’s actually enforced and sanctions on violaters, all of what’s coming out of these talks is going to be just hot air,” Pack said.

Countries including the United Arab Emirates and Egypt back Haftar, while the GNA is supported by Turkey.

Last month, world powers agreed at a summit held in Berlin to end all meddling in the conflict and stop the flow of weapons – but little has changed on the ground since then.

On Tuesday, Russian Foreign Minister Sergey Lavrov said the new EU mission should be cleared by the UN Security Council. Moscow, which is seen as aligned with Haftar, is one of the council’s five permanent members, which means it has the power to veto any of its decisions on Libya.

The LNA’s offensive on Tripoli has failed to breach the GNA’s defences. The fighting has killed more than 1,000 people and forced some 140,000 from their homes, according to the UN.

The country’s National Oil Corporation, which dominates Libya’s critical oil industry and is based in Tripoli, said losses from the oil closures have reached more than $1.6bn as of Monday.