A lady identified as Ngozi N Okoroji has accused popular perfume boss Walejana of being a fraud. 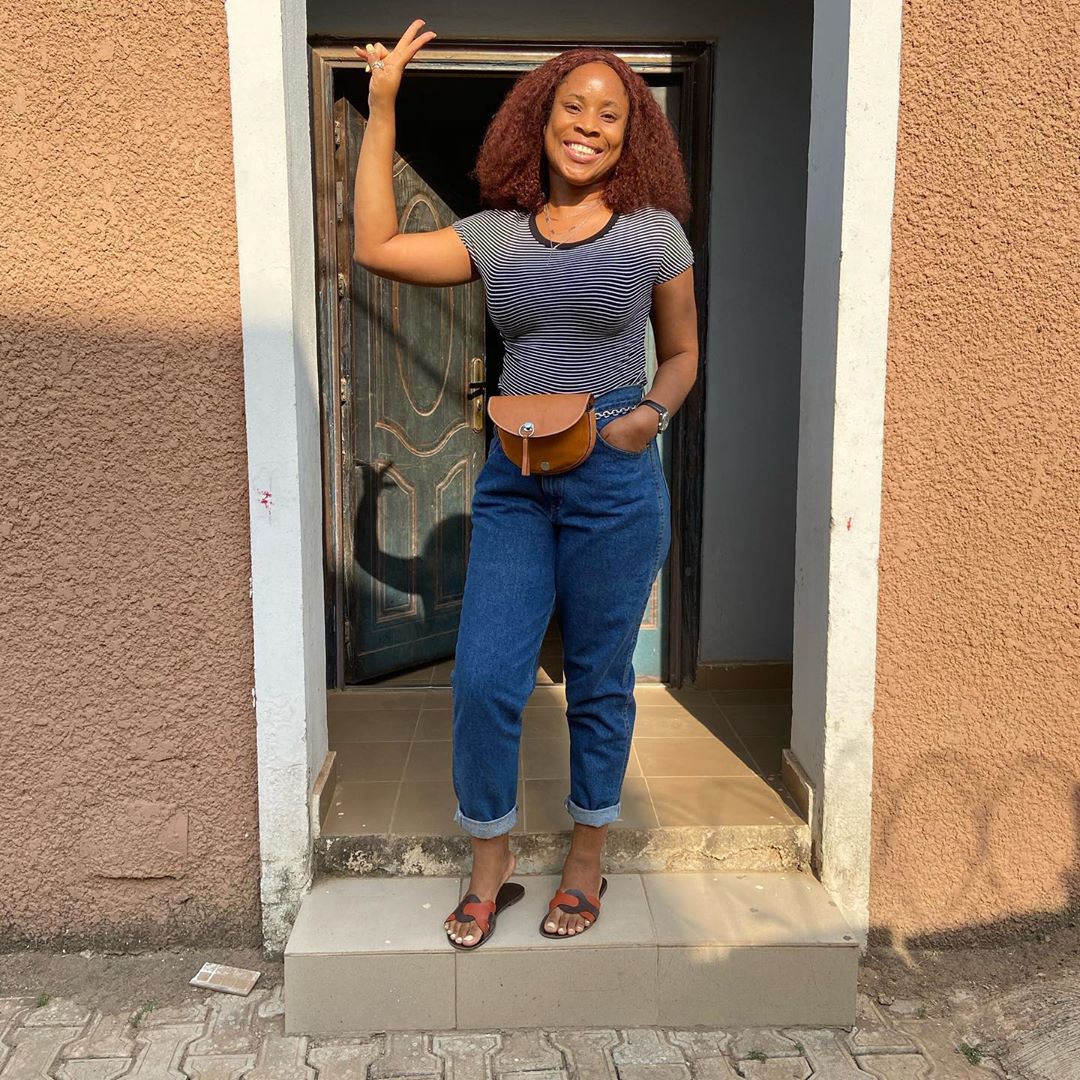 The lady claimed that the perfume boss has failed to pay her back her full returns after she invested in his business.

According to the lady, a friend of hers had advised her to invest in Walejana’s perfume business and she called them to get the information about the investment.

She explained that she immediately invested N500k and signed the necessary documents after she got her information in October 2019.

However, around November 2019, her friend reached out, telling her that she should collect her money and pull out because she struggled to get hers from them.

The lady noted that she immediately contacted them and claimed that she had a family emergency and she needed the money but they told her to wait until the due date in January or go to court. 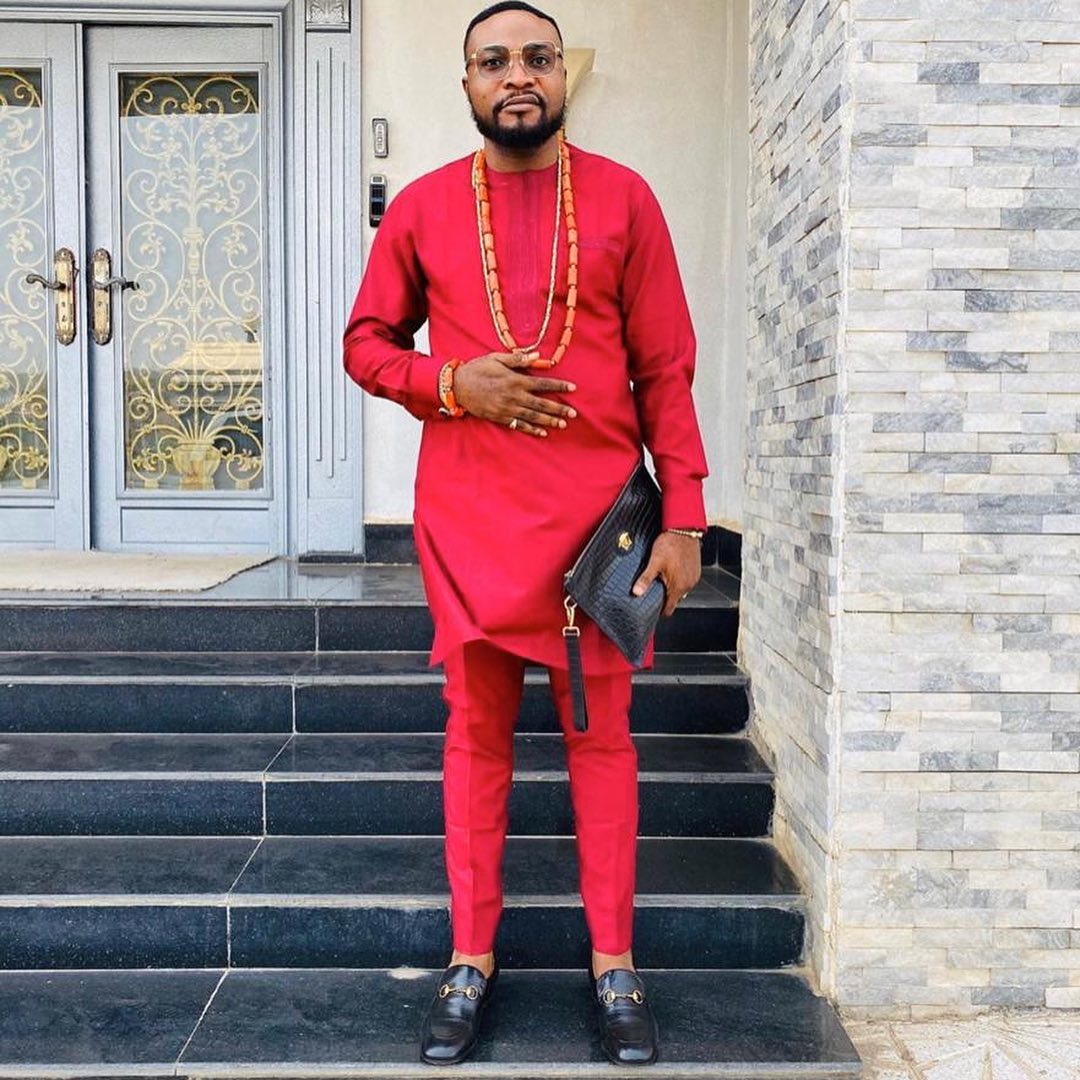 Okoroji said she decided to wait and continued to remind them as the due date came closer. She said after ignoring her reminders for a while Walejana contacted her, asking for more time to pay the full returns on investment.

According to her, after he pleaded with her, he sent her a sum of N200,000 out of N562,500. She explained that she demanded to get her balance immediately but they failed to do so.

The lady further explained that she went to his Instagram page to call him out as a fraud but he blocked her and then called to threaten her with lawyers. 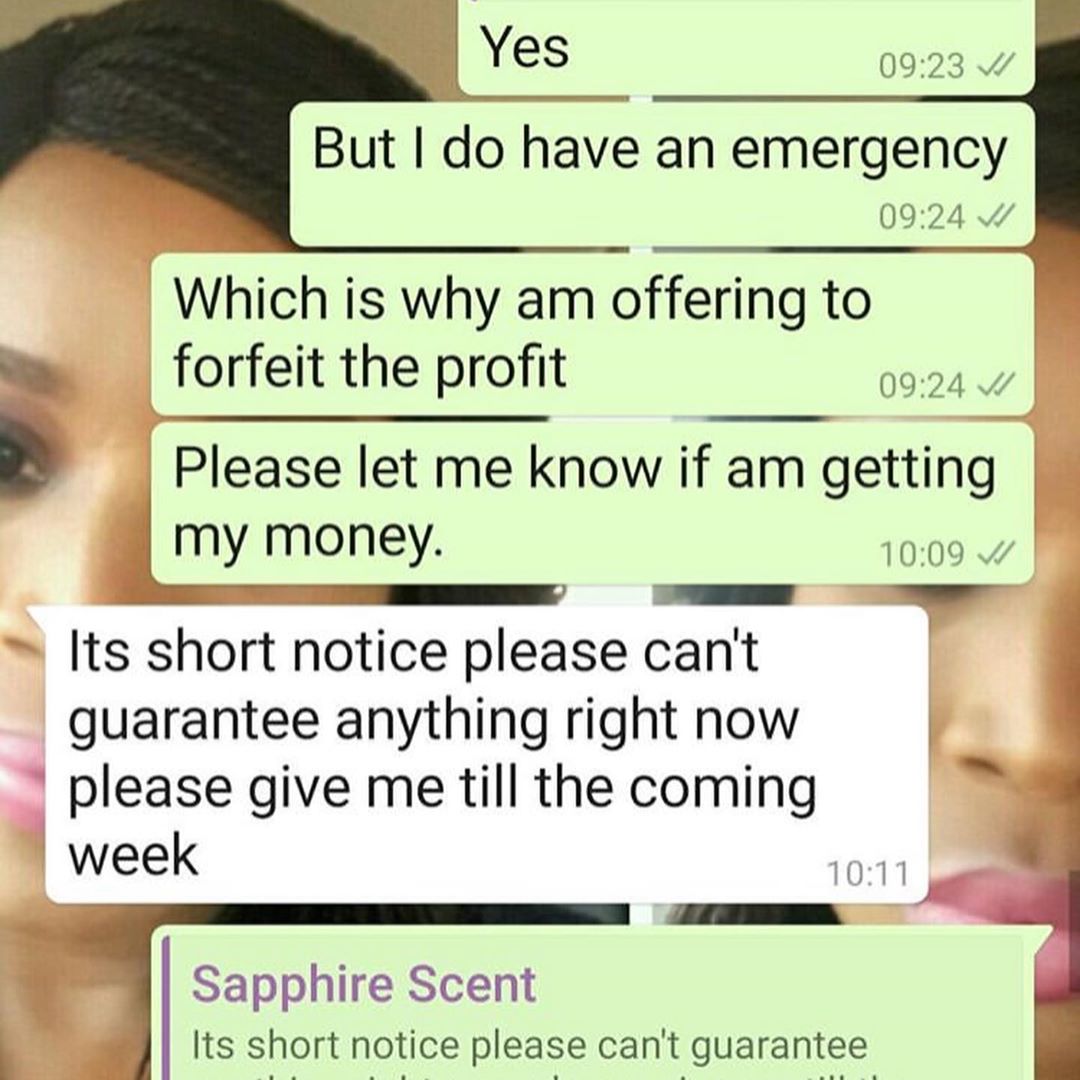 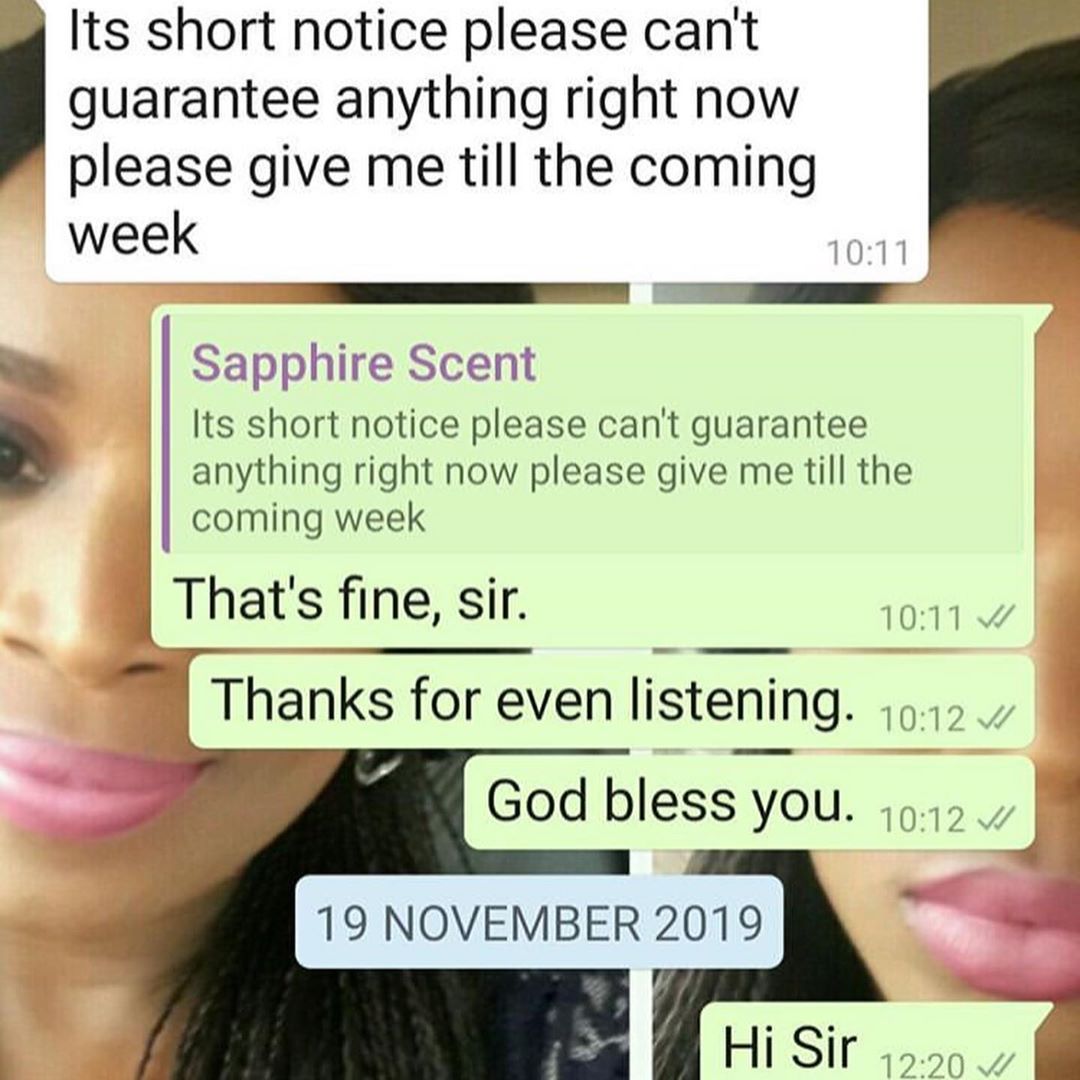 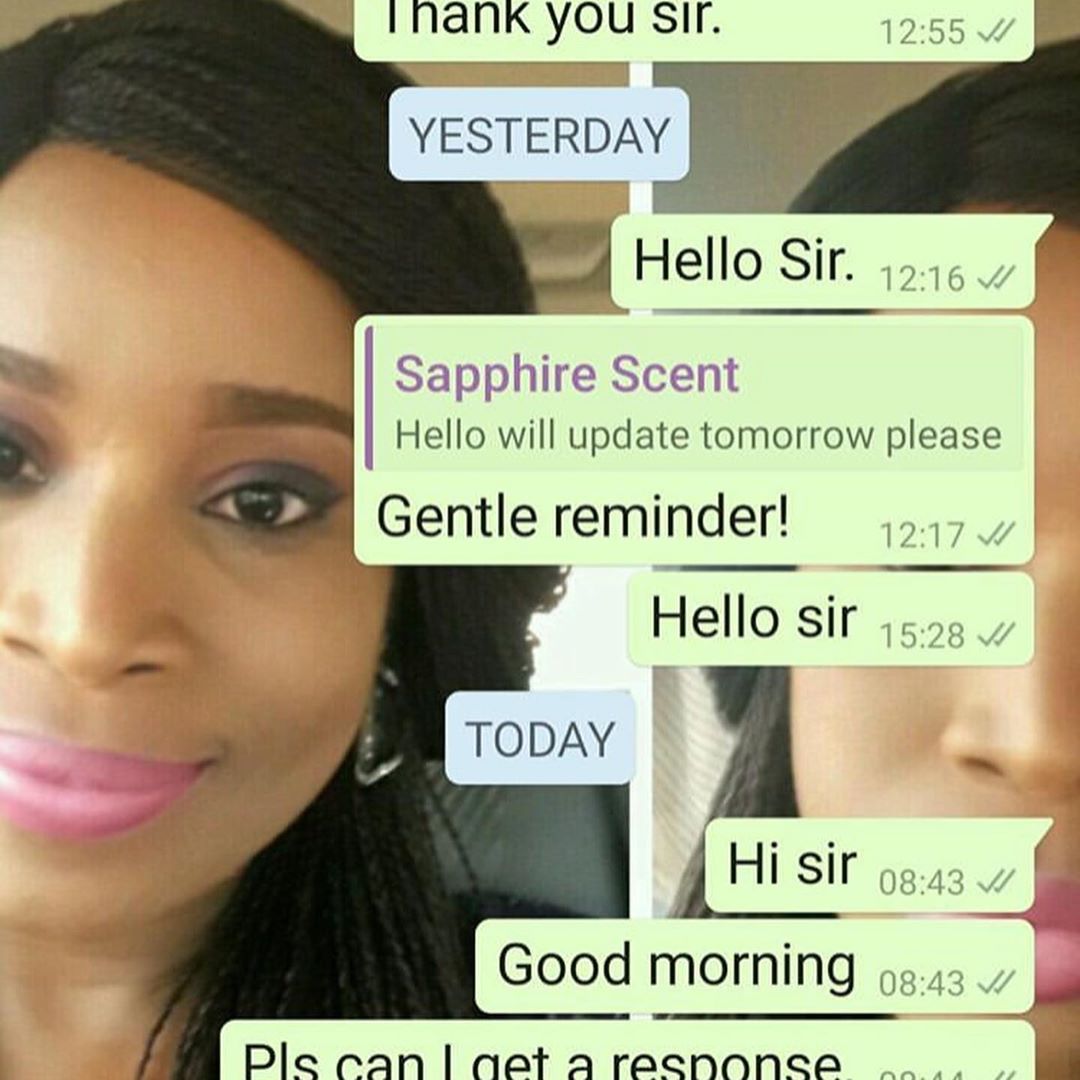 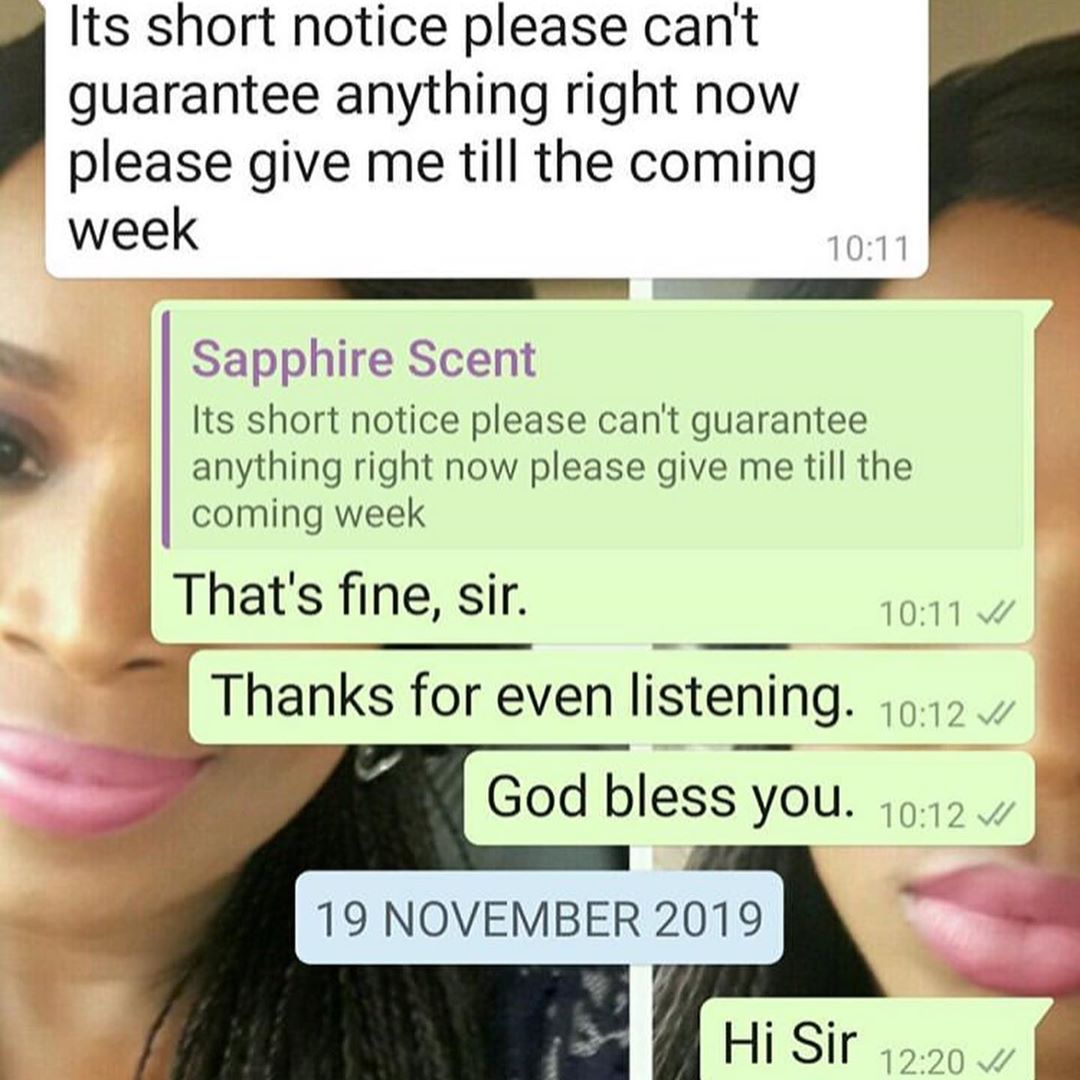 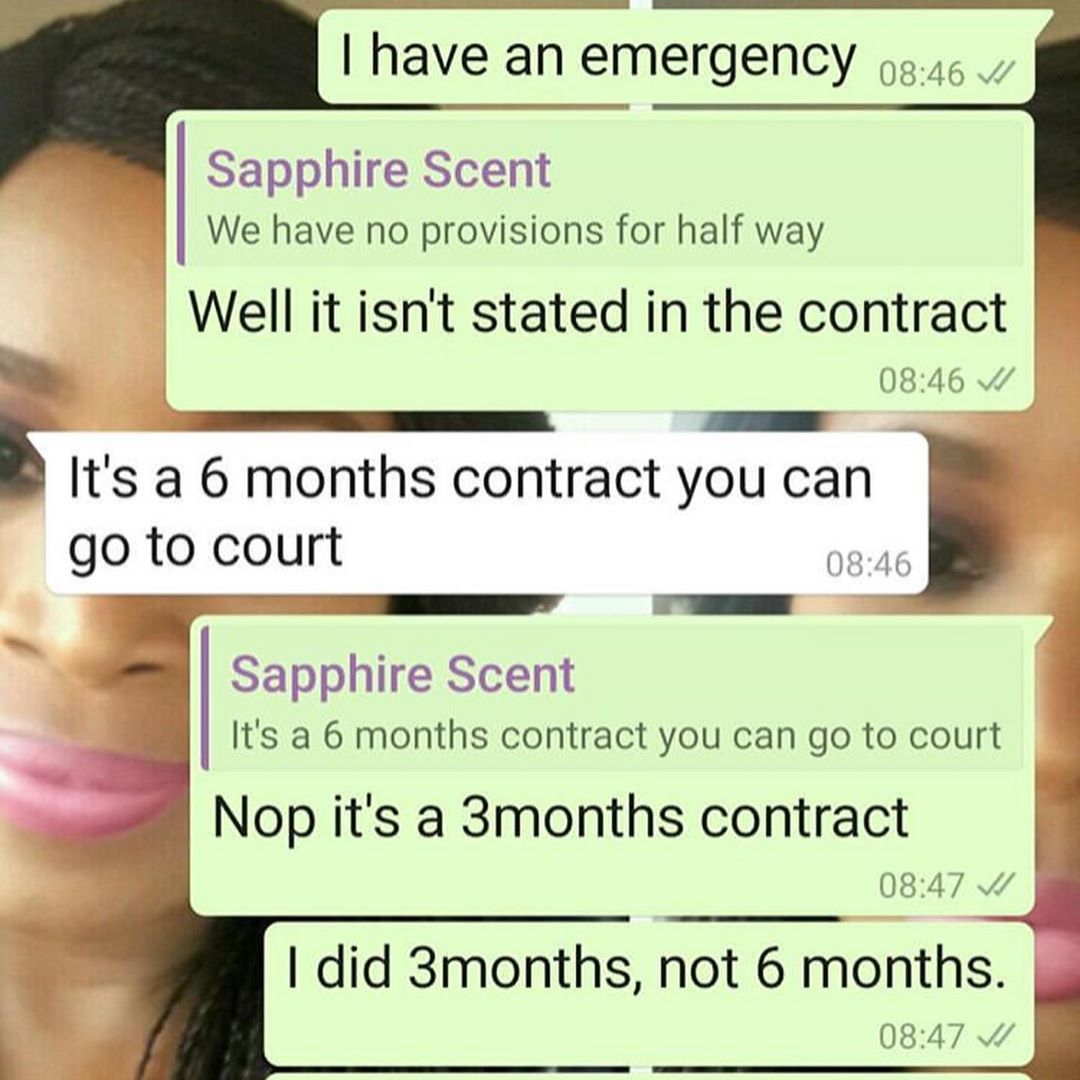 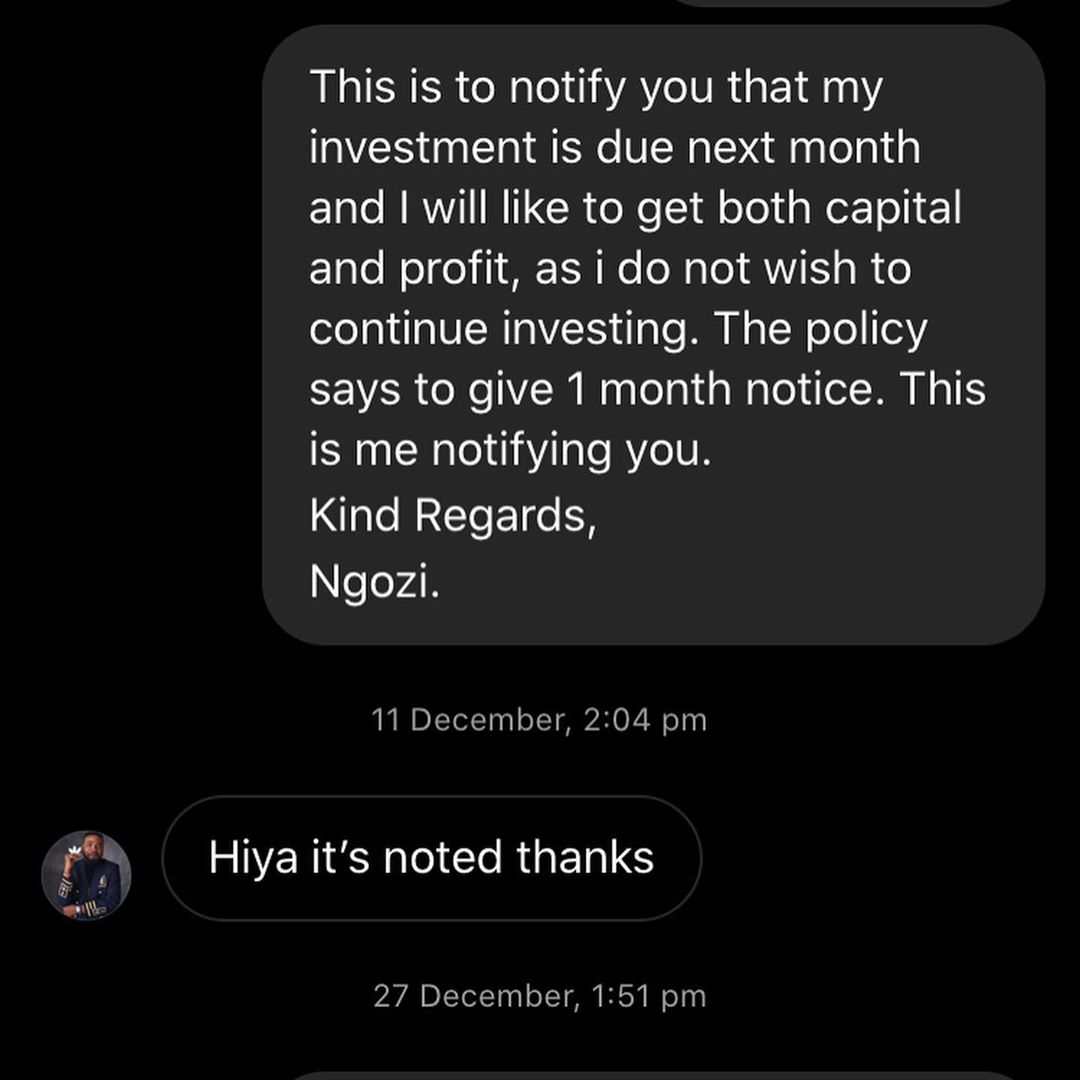 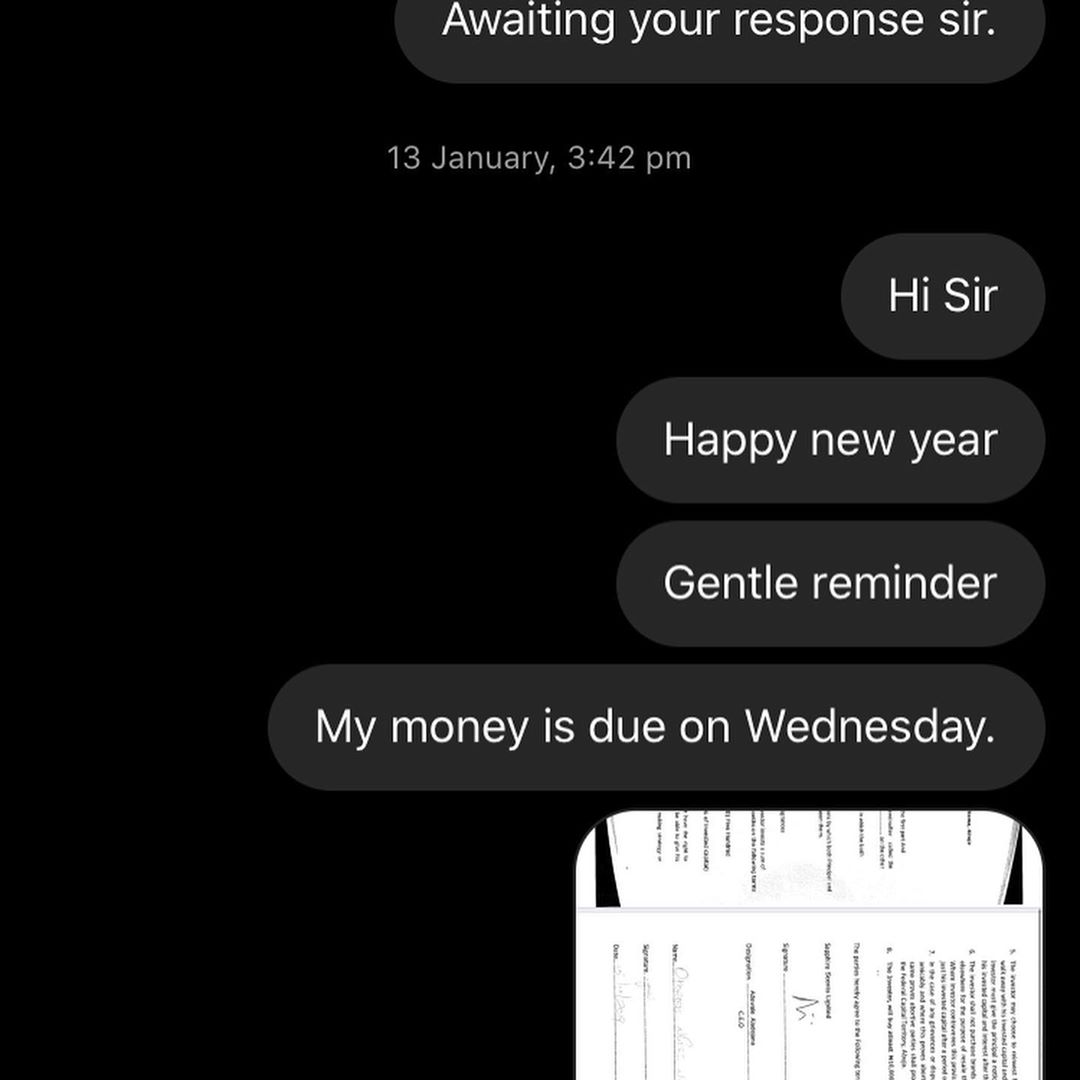 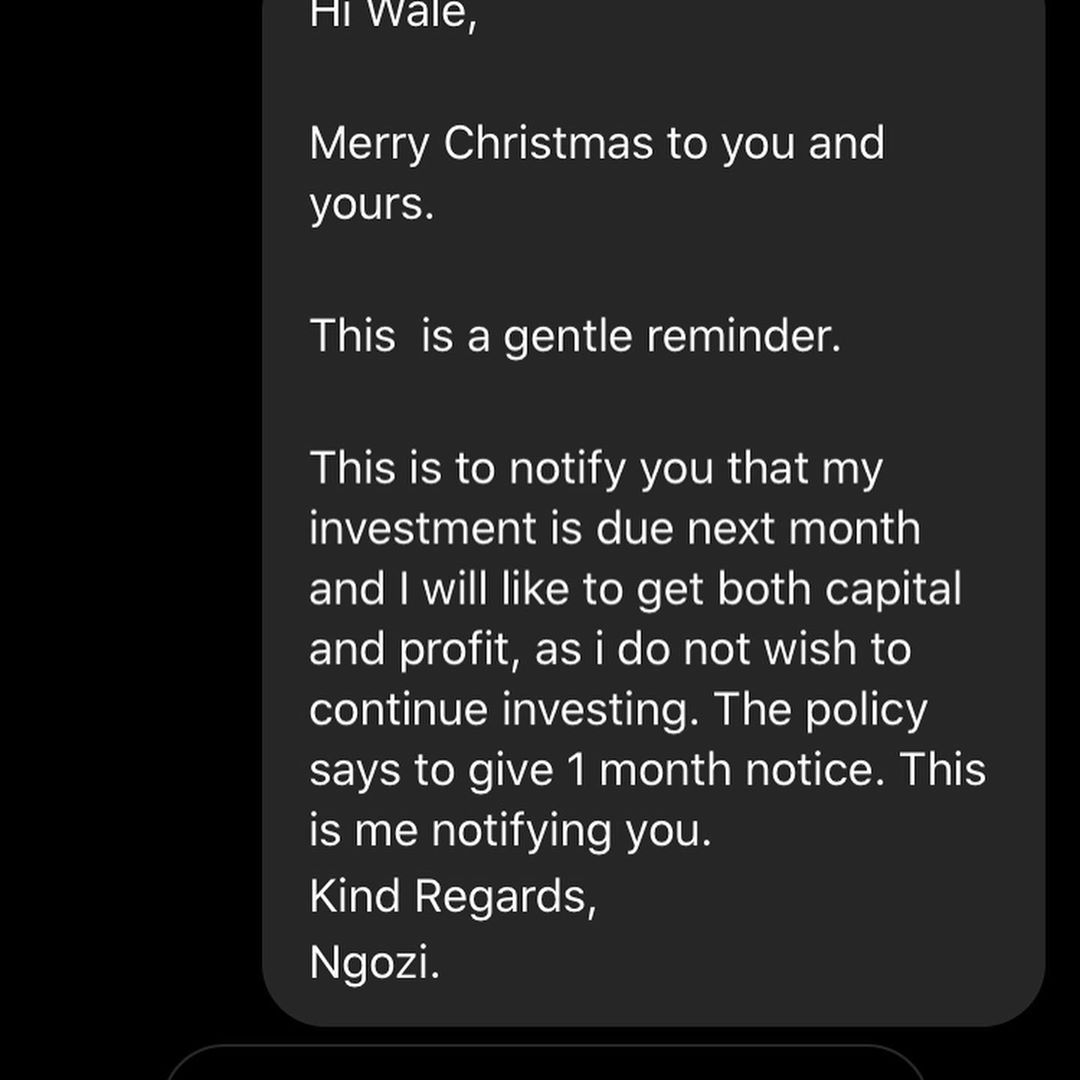 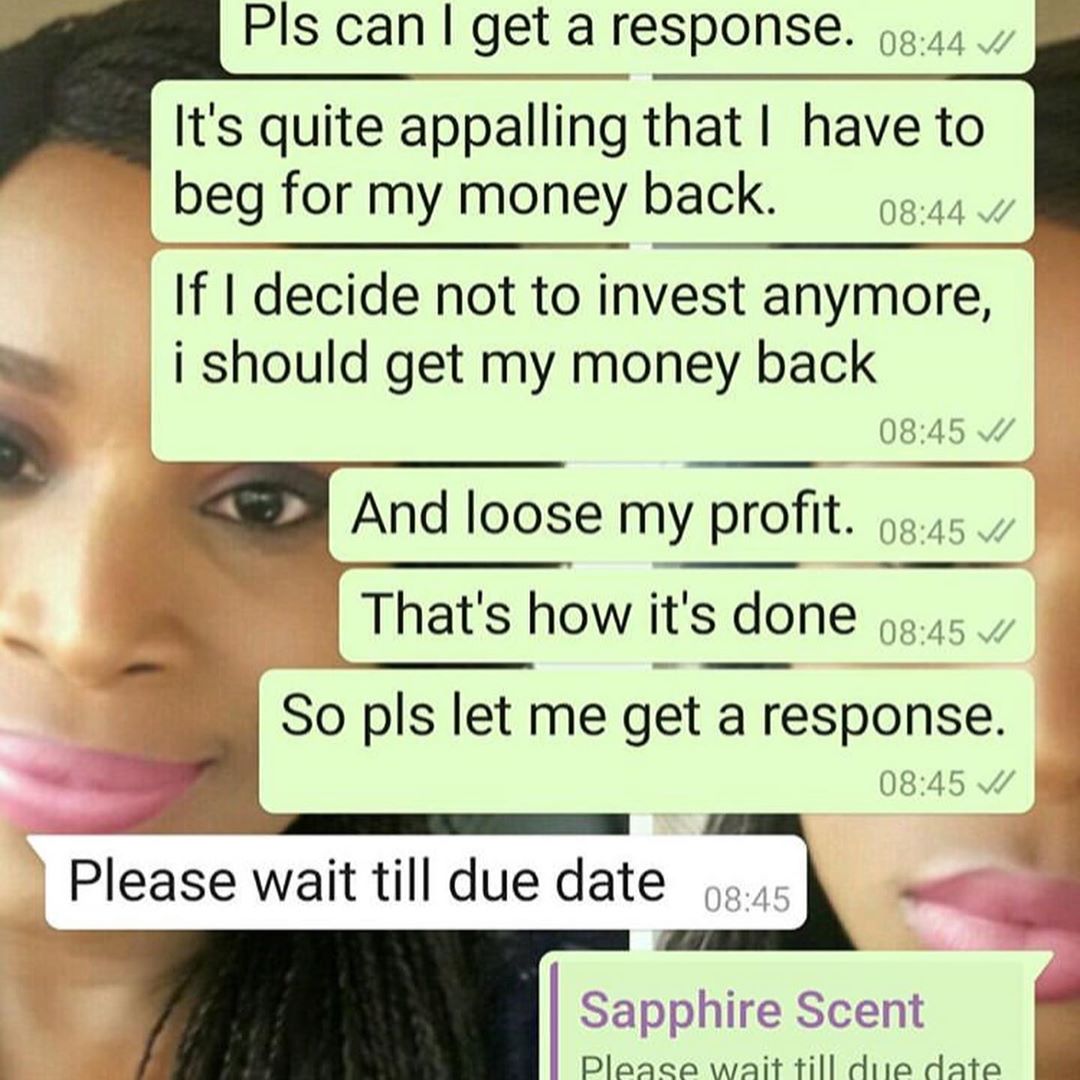 #badinvestment. It all started on the 14th of October, 2019. A friend told me about @sapphirescents investors program. I reached out and made enquiries. I made a payment of 500k into sapphire scents account. I was sent an MOU which i signed and filled appropriately then scanned back. Wale then prayed. Fast forward to November 14th 2019. My friend reached out and told me to collect my money, as she struggled to get hers. I reached out to wale claiming to have a family emergency. Wale told me it was short notice that he will get back to me. After 2 days of sensing messages with no response, he finally told me to wait till due date and if I wasn’t okay to go to court. I then told him i will wait, as January was close anyway. In december i sent a gentle reminder, i got no response. I waited till end of December and sent another reminder to which he responded okay. On the 12th of January i sent another reminder, he then told me they had sent out notice to investors for time till march. I told him i got none, as i really didn’t get any. He then pleaded for time till last week Friday after agreeing not to split my payment. On Friday by past 9pm i got an alert of 200k. I then called and texted sapphire scents to know what happened his employee Israel answered and said they were working on it, i insisted on getting my balance before 12midnight. I then went to wale’s page to post his a fraud and will expose him. Wale blocked me and then called my phone reigned insults on myself, family and generations. He then told me to get ready for war as i will be hearing from his lawyers. I told him i wasn’t afraid of him. On Saturday a certain man who claimed to be seun from DSS called to plead for more-time, i refused and said his deadline is Monday or i call him out. Wale also sent my sister who i used as my next of kin a message to say o will hear from his lawyers for posting on his page. He also asked me why i was ranting over a mere change of 362k.