Washington, DC – The impeachment trial of United States President Donald Trump is set to begin in earnest on Tuesday as Senate Republicans and Democrats remain divided over the law and important procedural issues.

The first business to be addressed is a resolution on the rules that govern the trial. Late on Monday, Senate Majority Leader Mitch McConnell presented his resolution, which would allow House managers, who work as prosecutors, up to 24 hours over the course of two days to present their case. Trump’s defence team would have the same amount of time. The arguments would be followed by 16 hours for questions and answers from Senators, and then four hours of debate.

“It’s clear Senator McConnell is hell-bent on making it much more difficult to get witnesses and documents and intent on rushing the trial through,” Schumer said on Monday “On something as important as impeachment, Senator McConnell’s resolution is nothing short of a national disgrace.” He vowed to propose amendments to the resolution, but with Republicans holding a 53-47 majority, their preferred rules package is expected to pass.

Trump was impeached by the House of Representatives last month for abuse of power related to his dealings with Ukraine and obstruction of Congress for refusing to participate in the impeachment inquiry. Trump has denied any wrongdoing and labelled the impeachment trial a “hoax”. He is in the Swiss city of Davos this week for an annual four-day gathering of the World Economic Forum.

The president’s lawyers on Monday filed a memorandum, arguing the articles of impeachment should be rejected as “an affront to the Constitution and our democratic institutions”.

“The Articles themselves – and the rigged process that brought them here – are a brazenly political act by House Democrats that must be rejected,” the lawyers said, adding that Trump did not break any laws in his dealings with Ukraine. 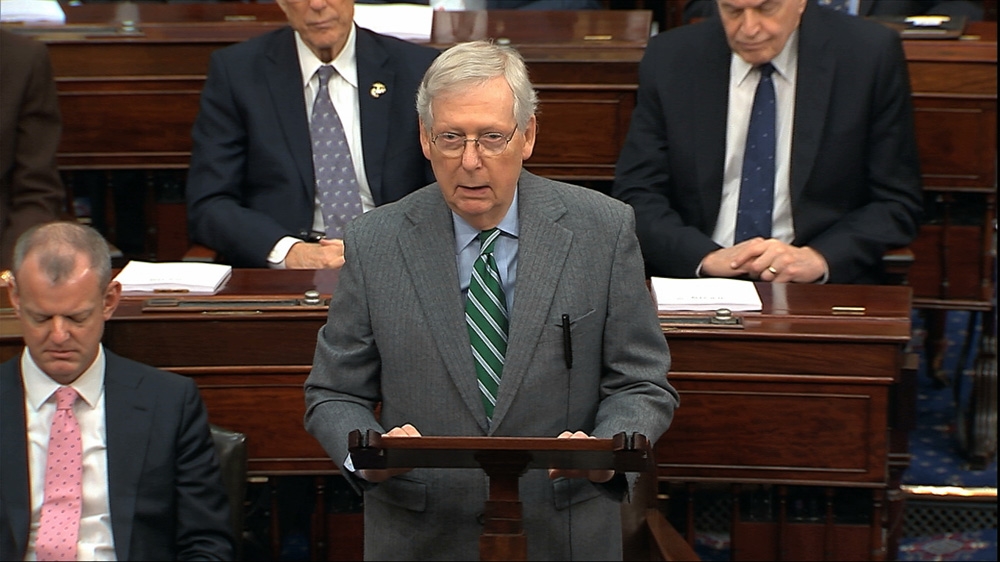 In this image from video, Majority Leader Senate Mitch McConnell speaks as the impeachment trial against President Donald Trump begins in the Senate at the US Capitol in Washington, DC [Senate Television/AP Photo]

House Democrats accuse Trump of abusing his power in office by orchestrating a pressure campaign to get Ukraine to investigate former Vice President Joe Biden, a leading Democratic political rival, as well as launch a probe into a debunked conspiracy theory that Ukraine, not Russia, meddled in the 2016 presidential elections.

The House impeachment investigation centred on a whistle-blower complaint in which Trump asked Ukrainian President Volodymyr Zelenskyy for the investigation into Biden and his son, Hunter, who had served on the board of a Ukrainian gas company.

At the time of the call, the Trump administration was withholding nearly $400m in congressional-approved military assistance to Ukraine.

In a written response to the Senate on Monday, the House managers, led by Democrat Adam Schiff, said the arguments being made by Trump’s defence team are faulty.

“President Trump maintains that the Senate cannot remove him even if the House proves every claim in the Articles of impeachment. That is a chilling assertion. It is also dead wrong,” the House managers said in an eight-page letter.

“The Framers deliberately drafted a Constitution that allows the Senate to remove Presidents who, like President Trump, abuse their power to cheat in elections, betray our national security, and ignore checks and balances,” the letter said. 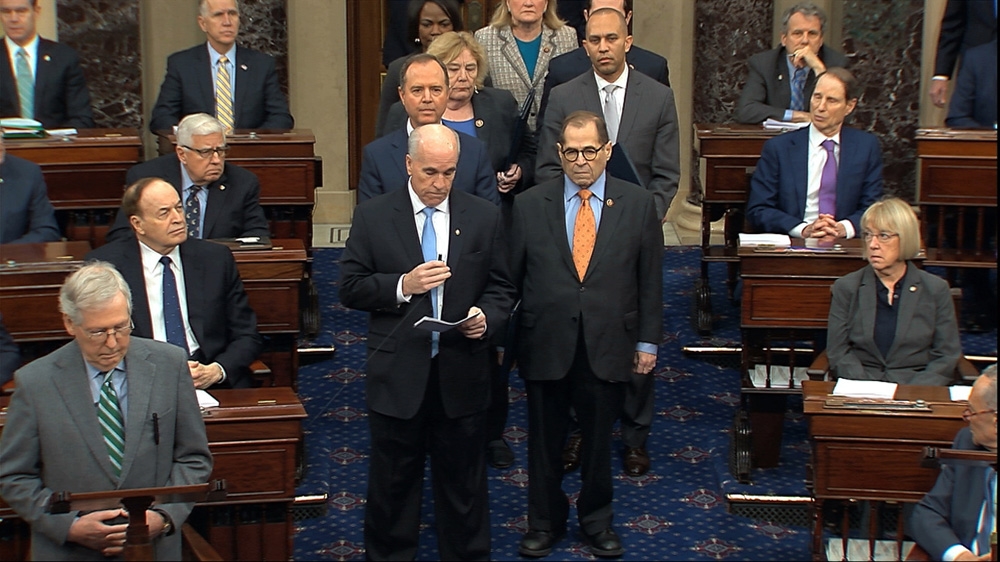 In this image from video, Senate Sergeant at Arms Michael Stenger introduces the House impeachment managers on the Senate floor as the impeachment trial against President Donald Trump begins in the Senate at the Capitol in Washington, DC [Senate Television/AP Photo]

Democrats are pushing Republicans to allow the Senate to call witnesses in the trial, including former National Security Adviser John Bolton and acting White House Chief of Staff Mick Mulvaney.

Democrats may also seek testimony from Lev Parnas, a former associate of Trump lawyer Rudy Giuliani, who has provided House investigators with emails and texts showing the extent of Parnas’s role in the campaign to pressure Zelenskyy.

Under McConnell’s rules proposal, the question of witnesses would not be addressed until after opening arguments and the question-answer session.

The Senate trial is unlikely to lead to Trump’s removal, as no Republican senators have voiced support for convicting the president.

A new CNN poll, conducted last week, suggested that 51 percent of Americans want the Senate to convict the president. About 45 percent said they do not want to see the president removed from office. But public sentiment is sharply divided along partisan lines, with 89 percent of Democrats supporting a conviction, and 89 percent of Republicans opposing it.

The trial also comes just weeks before the first voting event of the 2020 presidential primary and caucsus season. Four Democrats vying for their party’s nomination will be forced off the campaign trail and in the Senate during the trial. 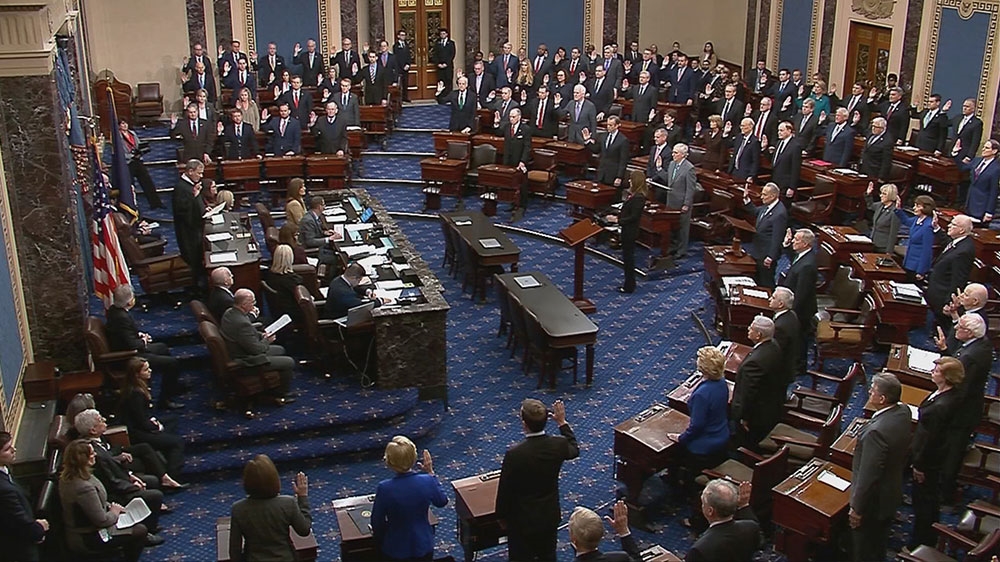 Although the Republican-led Senate is expected to acquit Trump, the trial marks a rare, somber event, highlighting the deep divisions of the country. That seriousness was echoed throughout the Senate chamber last week as Supreme Court Chief Justice John Roberts, who presides over the trial, swore the senators in as jurors.

Trump is only the third US president in history to face a trail. No president has ever been removed from office.

The fight against inequality starts from the streets, not Davos | Inequality