As a panel of judges read out the verdict, citing a lack of evidence to proceed with dissolution, supporters amassed at the reformist FFP’s headquarters in Bangkok cheered in celebration.

“Keep going Thanathorn! Get out Prayut!” supporters yelled raising three fingers in the air, a gesture that has become a symbolic expression of defiance against the country’s military backed establishment.

The complaint was initially filed in June 2019, when Natthaporn Toprayoon, lawyer and former advisor to the Chief Ombudsman, claimed that the party broke Section 49 of the 2017 Constitution.

In addition, Natthaporn claimed that the party’s logo, an orange inverted triangle, looks eerily similar to the symbol associated with the Illuminati, a secret society that conspiracy theorists believe seeks world control, and that the resemblence meant the two were probably linked. FFP decried the allegations as nonsense. Natthaporn also claimed the party leader’s social media posts and other publications were anti-royal in nature.

After the verdict, FFP leader, Thanathorn, told a group of reporters that “Future Forward will go on!”

Founded in 2018 on a pro-democracy platform, FFP came third in last year’s general election, which saw a pro-military party win the largest share of the vote amid opposition claims that the results were manipulated. The race ultimately saw Prayuth Chan-ocha, a former military government leader, return to power as civilian prime minister.

Thanathorn has since emerged as a key anti-government voice while one of FFP’s goals is to reduce the military’s influence in Thai political life.

The party has come under significant legal fire since its conception, with the military backed establishment filing 28 legal cases against it, with the number of legal challenges escalating during last year’s general election campaign period.

Thanathorn has faced a number of charges already, ranging from sedition, to cyber-crime charges, and more recently for breaking election laws by holding shares in a media company while running in last year’s general election. The FFP leader has denied all of the charges.

Future Forward Party MP, Rangsiman Rome, widely considered as one of the leading pro-democracy voices in the country, told Al Jazeera that the party “is ready for any situation” alluding to the numerous pending legal cases.

“If they try to ban [Future Forward], it means that people will feel negatively towards the court,” the 28-year-old said. “Even if they do ban my party, they cannot stop Thanathorn from running the campaign outside of parliament. People will understand the problem with the country even more than before. People will then know who’s the real problem.”

Despite winning the case, the party also faces a separate pending case which analysts say could also result in its dissolution. 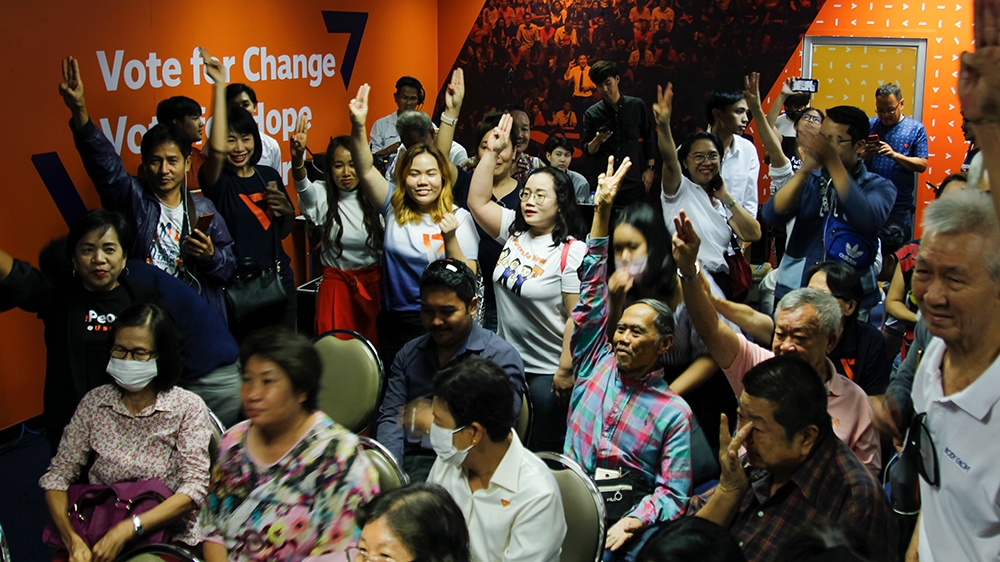 “They will remain a target of the government and the establishment. The court case today didn’t give any guarantee that they won’t continue to target them,” he said. “There is another case involving a loan that Thanathorn gave, that has stronger evidence to [dissolve the party].”

Titipol was referencing Thailand’s Election Commission’s decision (EC) to move forward with claims that FFP violated electoral law by accepting loans totalling 10 million Baht (approx. USD 330,000) from its leader, Thanathorn Juangroongruangkit himself. The EC says the loans are a conflict of interest, and if found guilty, the party could be dissolved.

Thai political observers say that the government views the FFP’s approach to changing Thailand’s political landscape as threatening to an establishment long entrenched by the military and royalist elites.

“I do not think that the networks of the Thai ruling elite will stop and make peace with the younger generation who think differently,” said Charnvit Kasetsiri, a history professor at Thammasat University.

Rights groups have said the raft of charges against FFP is a sign of the deteriorating state of freedom of expression within the country.

Matthew Bugher, head of the Asia Programme for Article 19, a human rights organisation, said the justice system was being “weaponised”.

“The allegations against the Future Forward Party were devoid of substance, and the court had little choice but to rule in the party’s favour,” Bugher told Al Jazeera.

“Today’s ruling should not distract from the persistent efforts to weaponise the justice system against politicians threatening the status quo. More serious challenges await the Future Forward Party. Freedom of opinion is under threat in Thailand. Politicians and activists risk jail and political exile merely by declaring their support for democratic principles and human rights.”

Amnesty International has described the legal cases being filed against FFP as a “relentless onslaught,” while Sunai Phasuk, senior researcher on Thailand in Human Rights Watch’s Asia division, told Al Jazeera that “the state of Thailand’s democracy is still hanging by a thread.”

“There is a string of trumped up charges filed by ultra-royalists and cronies of the military that seek to dissolve the party, put its leadership behind bars, and ban them from politics … Democracy is still under attack,” he said.

Yet despite the significant legal issues facing FFP, some supporters said Tuesday’s court victory brought a degree of relief.

“We are so happy to hear this today, of course, we’re excited,” said Chamikirn Phiwla-oung. “But at the same time, we’re cautious and sad that the country even looked at the case. It’s nonsense from the beginning. This is just playing with the emotions of the people of Thailand.”

Sanskrit to replace Urdu on railway signboards in Uttarakhand | News