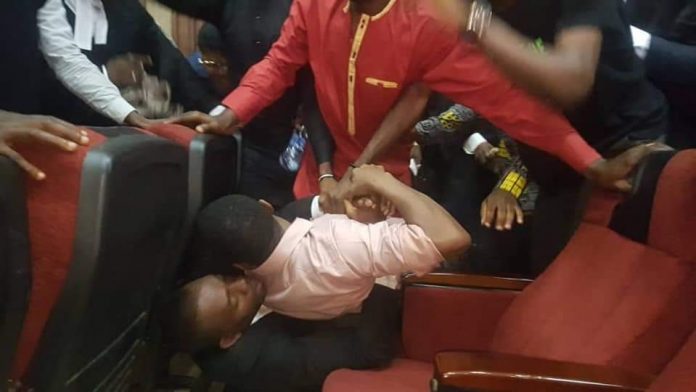 The attempt to rearrest the publisher of Sahara Reporters, Mr. Omoyele Sowore, by officials of the Department of State Security (DSS), which led to commotion inside a Federal High Court, Abuja, courtroom, has been described as an attack on democracy and the sanctity of the judiciary.

This position was made known by the Special Adviser on Strategy and Political Matters to the Oyo State Governor, Honourable Babatunde Oduyoye, in a statement made available to newsmen in Ibadan.

Oduyoye maintained that the attack om Sowore inside the courtroom, which reportedly led to a judge scampering for safety, was the peak of several threats to democracy under the All Progressives Congress (APC) government.

Oduyoye, a former Minority Whip of the House of Representatives, flayed the DSS officials for allowing their overzealousness to get the best of them, noting that attempt to arrest Sowore inside the courtroom was an affront on democratic ideals.

He maintained that threats to democracy and democratic ideals had been coming in different guise under the APC government, making reference to APC members, including a serving Senator in Oyo State, had been boasting about how the Supreme Court would hand over Oyo State, which they obviously did not win, to them.

Oduyoye called on the Presidency to institute a probe into the incident involving Sowore in other clear itself of culpability in the matter, while also charging it should call its agencies and members of the APC to order so as not to overheat the polity and cause crisis in the country.

He said that failure to rein in the overzealous tendencies would call into question the democratic credentials of President Muhammadu Buhari.

Oduyoye said: “The attacks on the Abuja courtroom under the guise of trying to rearrest Omoyele Sowore, to say the least, is an affront on democracy and the judiciary.

“On a daily basis, democracy is being threatened under the leadership of the All Progressives Congress-led Federal Government with agencies of the Presidency acting with unbridled impunity. We saw a similar invasion of the National Assembly in 2018. We have watched the Federal Government blatantly disregard court orders. But this attack on Sowore inside a courtroom is at the peak of the audacious impunities being perpetrated in our democracy.

“The attacks on Sowore under the pretext of his being rearrested is no doubt an attack on democracy. It leaves a bad taste in the mouth that the Department of State Security (DSS) could carry out such impunity with audacity in a democratic setup.

“Of a truth, there is no time in history than now that democracy has been raped and threatened. Part of those threats to democracy is going on in Oyo State where some members of the APC, including a serving Senator, have been twisting the judgment of the Court of Appeal on the March 9, 2019 governorship election in the State and boasting that the Supreme Court would hand the APC victory on the pending matter.

“The Presidency must, as a matter of urgency probe the activities of the DSS, while also calling its agencies and members of the APC to order on their undemocratic conducts.

“I also think it is high time all men of reason and advocates of democratic governance across the world rose up to condemn these negative developments.”

#KogiState: I Am At Peace With My Boss, Edward Onoja Carpets Propaganda – GCFRNG