BBNaija reality star, Leo Dasilva has slammed rapper and singer, Jidenna after he compared Lagos traffic to a ‘Concrete Jungle’.

It all began after Jidenna posted a video of himself crossing Lagos road with a caption that reads; “I learned how to cross traffic in New York, but Lagos feels like the original Concrete Jungle”.

I learned how to cross traffic in New York, but Lagos feels like the original Concrete Jungle. pic.twitter.com/XBN0o3aYwb

But reality star, Leo was  offended by the tweet and he  took to the comment section of the post to blast him while he poured encomium, American rapper, Cardi B.

“Never seen s super star promote Nigeria this hard the way Cardi B is promoting the country. Even Jidenna was calling Admiralty road concrete jungle and that one na son of the soil. I have UNSTAN and Re-STAN Cardi B even harder now. She came to spend monel here not just make iy. Supporting local businesses and promotin our country in a good light”, Leo tweeted. 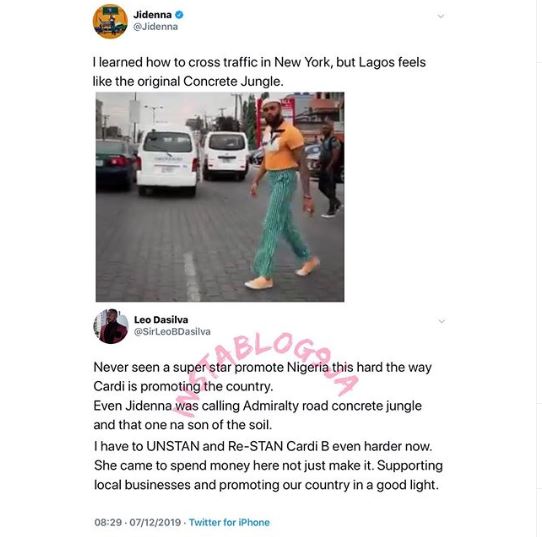 OAU Lecturer Found Dead In His Office. The lecturer