Eric Wuyin Geeyam gained admission into All Nations University College in Koforidua the Eastern Regional Capital in 2015 to pursue Biomedical Engineering, but today he is popular for his farming prowess.

Shortly after the admission, he noticed the University had large acres of land at its new site along the Koforidua Akwadum Road yet to be developed. He requested management to lease portions of the land to farm to enable him get additional income to pay his fees, the school granted his request.

Wuyin Geeyam ,24, from Kpadai District in the Northern Region of Ghana, currently has seven (7) acre Maize farm, three-acre cassava farm, 2 acres of Yam, one(1) acre of groundnut farm, then half-acre of tomatoes, Okra and Pepper each, on the University’s land. He has also inspired and guided many students of the University to farm on campus.

He was adjudged the Municipal Best Youth Farmer 2019, and given two bags of fertilizer, four cutlasses, a Wellington boot, Weedicide and a piece of GTP Cloth and a certificate as Prize.

In an interview with Starr News, he said “I realized that being a student I can do farming as well alongside the Education. Most of the youth see farming as a punishment or something wrong with that so they expect white colour jobs, but as a young undergrad I put it into myself that I do farm and go to school as well”.

According to him, he planned very well to manage his time on-farm and that of academic work “it is just the matter of you scheduling your time very well. It is a matter of Planning”.

He said “farming is very lucrative and it is very good for young people as we venture into it. Being a farmer, you don’t have to buy the food you eat”. 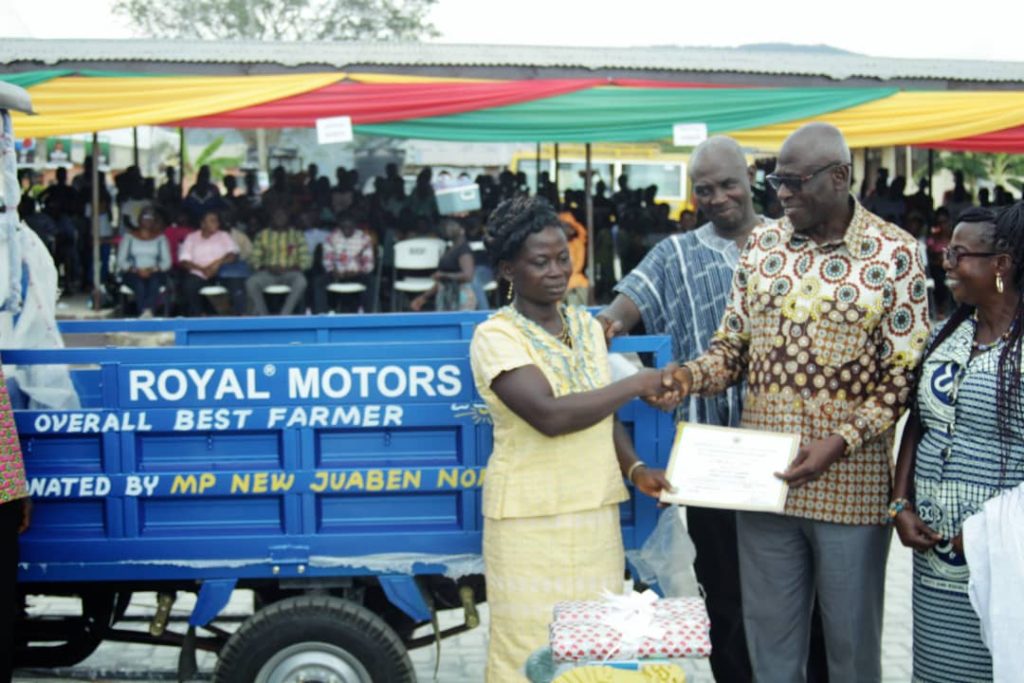 A 36-year-old Comfort Djamasi from Akwadum was adjudged overall Best farmer in the municipality.

Comfort has been farming for the past 20 years. She has 8 acres of maize farm,
11 acres of cocoa farm, 3 acres of Cocoyam, 4 acres of Cassava, 5 acres of plantain,2 acres of Yam and an acre of Sweet potatoes. In addition, she has a 50-bird poultry farm and five goats.

She received a tricycle donated by the Member of Parliament for New Juaben North,Nana Adjei Boateng. In addition, she was given two bags of fertilizer, Four Cutlasses, a Wellington Boot, Napsack spray, Weedicide and two pieces of Clothes.

The First and Second runners-up were Alfred Tetteh and Asamoh Chartey respectively.

In all, nineteen(19) hardworking farmers were recognized and given certificates and varied prizes.

The Member of Parliament for New Juaben North, Nana Adjei Boateng, said government is cognizant of the critical role agricultural sector continues to play in the Ghanaian economy and job creation reason it has increased investment to the sector and initiated many flagship programs such as Planting for Food and Jobs, Planting for Export and Rural Development, Hand Pollination program in the cocoa sector among others gear towards boosting production in the sector.

He encouraged the youth in the municipality to take advantage of these opportunities to venture into farming.

On her part, the Municipal Chief Executive for New Juaben North, Comfort Asante reiterated the commitment of the Assembly to supporting farmers in the municipality to improve on productivity.

She said thousands of different species of seedlings have been raised for free distribution to farmers while Agriculture extension officers deployed to provide technical assistance to farmers in the municipality on best agricultural practices.

She urged residents of the Municipality to consume local rice to help boost the economy aside being nutritious for better health.

Adongo schooled on foreign exchange by University of Ghana student

University of Ghana urges calm as one student tests positive

Man, 35, beats wife after catching her having sex with another man –