Two people have been allegedly shot dead by yet-to-be identified policemen who reportedly stormed the Anambra home of Ifeanyi Ejiofor, lead counsel of the founder of the Indigenous People of Biafra (IPOB) Nnamdi Kanu while trying to arrest him.

According to viral photos uploaded on social media, a police officer can be seen fighting with some residents of Oraifite who engaged in a protest over the alleged invasion of the home of Nnamdi Kanu’s lawyer who just buried his brother few days ago. 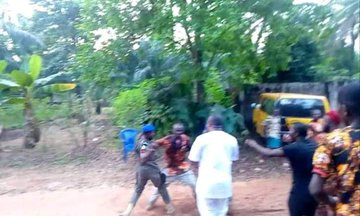 While reacting to the development, the former minister of aviation and PDP Chieftain, Femi Fani-Kayode claimed that no fewer than four people died in the home invasion.

“Just been informed that the home of my friend and brother, Ifeanyi Ejiofor, in Oraifite, Anambra state has been stormed by the police and 4 people have been killed. Ifeanyi, who is @MaziNnamdiKanu ‘s, buried his brother 4 days ago. His family are still mourning and now this,” he tweeted. 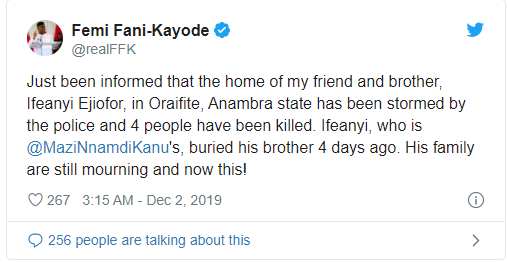 As at the time of reporting, the Anambra State Police Command is yet to confirm the claims made over the alleged home invasion.